I have often referred to this page of Donald Horowitz's book but via the miracles of books.google.com (p. 169 of his book) and PDF making, I can produce my favorite list of adjectives: 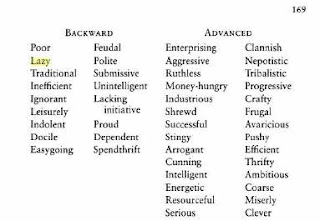 The basic idea here is that these dynamics, the logic of invidious comparison, are universal.  And so when friends tweet about Asians facing quotas at Ivy League schools and how they are the new Jews, I have to think of this stuff.