Since the last mid-term election, everyone has noticed that Obama is just a bit more himself, a bit more dynamic, and a bit more willing to make decisions that would have been politically risky.  Most obvious example is the decision to have diplomatic relations with Cuba and reduce the sanctions.

I raise this right now as I have Obama 2014-present to thank for a phrase that may have existed before but has come to be most useful of late: 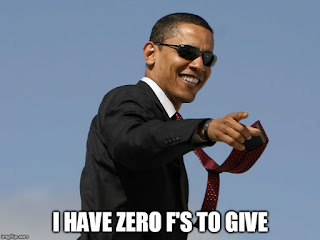 Yep, my wife said last night that she had zero fucks to give, and I could not help but think that the President might have had something to do with the way she articulated that feeling.

Posted by Steve Saideman at 8:07 AM

If Obama avoids the twap *ahem* and becomes the first two-termer since Ike to finish his presidency without an honest-to-god corruption scandal (see Matthew Dickinson all freaked out about it last year http://bit.ly/1OfCU4m), the future debate surrounding his historical ranking will get very interesting.