D&D and the GOP 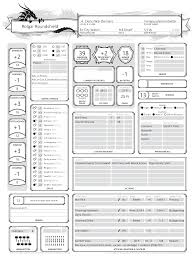 I have often posted here and on twitter about how that keen insight from Dungeons and Dragons character attributes applies so well: that intelligence and wisdom are two distinct characteristics.*  One can very smart but not every wise or can be wise but not very smart.  Given Jeff Sessions saying on his SF-86 form (the form one fills out to get/keep a security clearance) that he had not met any representatives of any foreign government over the previous seven years, I had to conclude that he is not very wise.  I am not sure he is all that smart either, but he certainty is not wise as defined by D&D:

The scores range from 3-18 for humans (other species in the D&D universe can go above 18 if I remember correctly.  Anyhow, I thought it would be fun to imagine the character sheets for key political players these days, and, please correct me if I am wrong or come up with better takes than this.

Donald Trump
Race: Half-orc.  (Like Voldemort, this case of mixed parentage has bred xenophobia) Dwarf (Peter Trumbore convinced me this fits better: "Avarice, boorishness, and xenophobia are all classic traits of the dwarves. As is clannish behavior."
Alignment: Chaotic Evil (Chaos vs Law reflects freedom/adaptability/flexibility vs. honor/authority/reliability/trustworthiness; Good/Neutral/Evil reflects altruism/respect for life/respect for dignity vs harming/oppressing/etc)
Class: Thief (Duh)
Strength: 15       Donald has crushed some hands in his day.
Dexterity: 18      He can act quickly and spin quite a bit.
Constitution: 6   He tires easily.
Intelligence:  7   He really does not like to learn.
Wisdom: 12        He has some sense and intuition--he can figure out a crowd.
Charisma: 18      (orce of personality, persuasiveness, personal magnetism, ability to lead, and physical attractiveness)  I don't get it, but he does have a powerful personality, he persuades people despite being utterly full of bs, and so on.

Jeff Sessions, who inspired this post.
Race: Elf (Duh)
Alignment: Lawful? Evil.  That he has very fixed principles about who should be ruling and who should be serving.
Class:  Cleric, pretty sure he might be able to control the undead.  Instead of healing, he causes pain and suffering.
Strength:  11
Dexterity: 15
Constitution: 18  He seems to have much stamina as he works really hard to destroy the Justice system
Intelligence: 14  He has learned how to be better at being a racist
Wisdom:  9        That SF-86 is just unwise.
Charisma:   6      He is definitely not likable.

Jared KushnerRace: Human child
Alignment: Chaotic Evil.  He is just an opportunist, who is imitating his father by selling out his brother-in-law.
Class: Wizard but level 1. He has little magic and is less effective in combat.
Strength:  7
Dexterity: 6       He seems have lousy reflexes, does not really act quickly.  Does he act at all?
Constitution: 7  Seems sickly
Intelligence:  5  Needed father's help to get into Harvard.  Any evidence thus far of learning?
Wisdom: 10      He is not very wise, but his efforts to deflect responsibility seem to be working so he may be craftier than he seems.
Charisma:  14   While unlikable from a distance, it is hard to understand his ability to float through life thus far.  People around him keep giving me more chances, so I guess he has some magnetism.

Don Jr.
Race: Human (I apologize on behalf of all humans for what he does).
Alignment: Chaotic Evil. He wants to be his dad.
Class: Thief (but of low skill)
Strength: 8
Dexterity: 5     He can't help but trip all over himself
Intelligence:  4
Wisdom:  3  Did you see him tweet?
Charisma:  5  Ewwwwwww!

Race: Half-Elf
Alignment: Neutral evil
Class: Wizard   She can cast spells, no doubt about that.
Strength:  13
Dexterity: 16    She can move so swiftly and dance so well that none of the shit her family creates seems to stick to her.
Constitution:  17   She seems to have all of the family's stamina.  She keeps at it, when one would expect her to run or hide.
Intelligence: 16  Among this group, she is a genius.
Wisdom: 12  She is wise relative to her family but just to them.
Charism:  17  She is pretty and seems to get folks to do her bidding again and again (see Drezner's post)


* I have not played D&D in many decades so I am probably not the best person to be doing this.  However, I called this place "Semi-Spew" which could be interpreted as half-assed.
Posted by Steve Saideman at 8:38 PM

Email ThisBlogThis!Share to TwitterShare to FacebookShare to Pinterest
Labels: pop culture, US politics