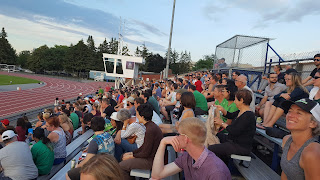 I went to my second professional ultimate game last night (first time reported here).  It was the final game of the season for the Ottawa Outlaws, and was at a far more convenient location.  So, I felt compelled to see how my favorite sport is doing.   From the crowds I saw, it is doing pretty well.  Nice mix of ages--lots of kids and teens, some old frisbee vets. 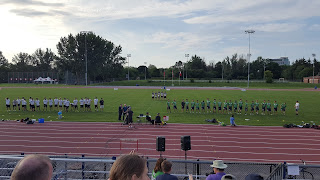 The Ottawa Outlaws were in green, and NY Empire were in white.  I overheard folks taking about how there were multiple professional leagues, but one collapsed. This led to the merger of the NY folks, so they have a heap of talent.  They had two guys were dominated the skies--making many good defense plays and out-skying (out-jumping) the Ottawa players who had no such mutants playing for them. 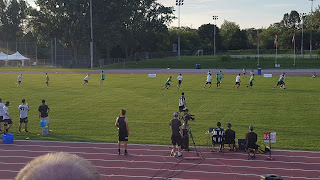 It was a great day for it--not much wind--just enough to make it interesting, and, thankfully no rain.  The play was very impressive in terms of athleticism--lots of layouts, impressive throws (one 3/4 of the field hammer--upside down for a score).  Like last time, turnovers kill.  The Outlaws were sloppy early on, so NY could get a four point lead.  They mostly traded points the rest of the way. 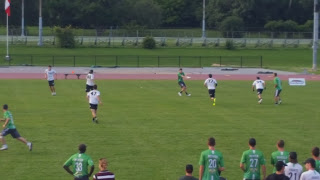 NY Empire played zone defense a few times, which explains why so many white uniforms are near one green guy with the disk. 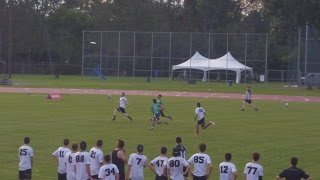 One of the big differences is not so much between professional and amateur but between men's and mixed (co-ed): the men's game involves far more hucking.  That is, far more long throws and somewhat less working up the field with shorter passes. 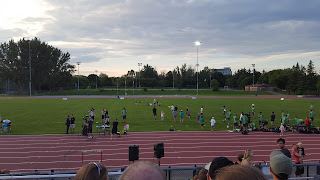 Once again, half time involved letting the kids on the field for some throwing.


I look forward to seeing the game and the league evolve further next year.  The championships are in Montreal at the end of August, by the way.