I was in Toronto yesterday for an awards ceremony.  Aisha Ahmad, one of my Phd students from my time at McGill, was receiving an award for best article on an international security topic in 2016.  She was supposed to heave received it last winter at the ISA meeting in Baltimore, but that took place shortly after Trump announced his Muslim ban.  So, I accepted the award on her behalf, and we decided to hold an event in Toronto to recognize her. 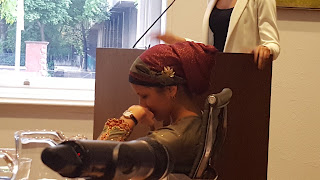 Of course, Aisha decided to take advantage of the moment by doing two things: schooling us on doing research and on highlighting her students.  After big IR poohbah Robert Keohane (whose last name gets mispronounced more frequently and in more ways than mine) had a few comment and insights, Aisha discussed positionality in research, especially in fieldwork, making it clear that everyone has a distinct position from where they ask questions, but it seems that only brown folks and women folks tend to be asked about their position and how it affects their work.  She had a great example from real life as her white male colleagues interviewed the same guy she did on the same day but in a different context and got a very different perspective of that same guy.  Really very clarifying discussion.

Aisha then had a series of her students--undergrad and grad--to discuss their work briefly, and they knocked our socks off.  I have always been impressed with her diligence and her dedication, but mentioning that would have turned my Harry Potter reference (three d's of disapparition) into a Dodgeball reference (five d's of dodgeball).

After she talked, Barnett Rubin moderated, David Dewitt and I said a few things.  David talked about Aisha's article and spiffy new book. I talked about Aisha and how truly impressive she is and how far she has come.  The path has not been easy for her, but she has walked it (or ran it, I guess) with grace and fire.

I have much pride for her excellence, but I am also humbled because she works so much harder than I do/did, is so much more diligent and passionate about the work, and is just rocking the profession. I joked that I will take all credit for her success, as is my right as her supervisor, but, we know the truth--it is all Aisha.
Posted by Steve Saideman at 11:46 AM