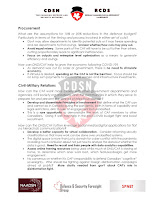 Last week, members of the Canadian Defence and Security Network, along with networks funded by the Department of National Defence (SPNET [Concordia-based group of engineers working on tech-related policy, like AI], the Defence and Security Foresight Group,and the North American and Arctic Defence and Security Network) released a briefing note, based on a teleconference we held via zoom to discuss a series of questions that DND had given us and some we had developed.  I am discussing each piece, day by day.  I discussed Operations on Wednesday, Security on Thursday, Personnel on Friday, and on Monday I addressed Procurement. Today, I address the piece that I know the best even though as I mostly sat on that group's conversation: civil-military relations.

1.      How can the CAF work more closely with other government departments and agencies, civil society organizations, and the communities in which they serve to prepare for and prevent the spread of infectious disease?
While the Canadian Armed Forces has been involved in disaster relief for a long time, I am not sure whether either the public or local/territorial/provincial agencies know what the CAF can and cannot do nor what their guidelines are.  So, we advised DND/CAF to clarify what are the CAF's rules of engagement--what can they do in terms of capabilities and what are they allowed to do.  These rules mostly exist but are not well-known.  In Afghanistan, Libya, and elsewhere, the Chief of the Defence Staff develops not just a letter of intent (I was able to get most of these, partially redacted, for my research) but rules of engagement (nope, didn't get those) to guide the units in the field (or in the skies).  It made sense to keep this stuff classified since we wouldn't want the enemy to know the intent or limits of our forces.  In Canada, the enemy is the virus, and it can't read.  More importantly, the public and the CAF's partners need to know what the CAF can do.  While there is a website with lots of information, one place it falls short is being clear about the limits.   Let's see the equivalent of rules of engagement, please.

The second part here is obvious and one which the CAF knows well--that this is an opportunity to remind the Canadian public that the CAF is there to help out in domestic emergencies and not just expeditions elsewhere.


2.    How can the DND/CAF further leverage social media/digital applications for flat (vs hierarchal) communications?
It apparently is really hard to work as a team from home in a pandemic, especially if much of the material is classified.  Most folks in DND and the CAF don't have classified computer systems (if Canada is at all like the US, the classified internet is on a different network entirely from the unclassified, so it is not like one can just hit a new webaddress to get to the juicy stuff).  Given that Zoom is a Chinese-related company, DND/CAF have to rely on other tools to interact.  MsTeams is an American one, so, um, sure, it could be safe.  Anyhow, the point is that the CAF and DND never planned to have most of its workforce work from home.  So, new tech may be required, new tactics and procedures are definitely required.  And to address an old problem--that too much stuff is classified.  Folks at home would be more productive if they didn't have to worry about violating the laws governing secret stuff if less stuff is secret.  Unnecessary classification is endemic because it is less risky for individuals than underclassifying stuff.  So, some thought to addressing this would be handy.

When digital stuff comes up, the thought turns to cyberspace and cyber war.  But another problem is simply knowing what is going on.  Data analytics can help make sense of all of the information that is out there, and COVID reminds us that bad data collected badly can't inform good decision-making.  So, we need to improve the CAF's ability to put the info together and make sense of it.

Finally, yes, the Russians and Chinese are filling the info battlespace with crap.  Whose job is it to combat this stuff?  DND?  CAF?  Other government agencies?  It is not clear that the CAF should be the lead on this just because they have much capability.  The government really needs to think hard about who should have which jobs in the disinformation fight.


We will be examining each of the questions and answers further through the spring and summer and produce a report with more evidence and explanation.  If you have questions or comments, let us know.