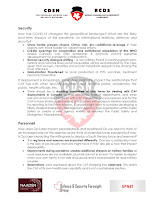 Last week, members of the Canadian Defence and Security Network, along with networks funded by the Department of National Defence (SPNET [Concordia-based group of engineers working on tech-related policy, like AI], the Defence and Security Foresight Group,and the North American and Arctic Defence and Security Network) met via zoom to discuss a series of questions that DND gave us and some we developed.  I am discussing each piece, day by day.  I discussed Operations on Wednesday, Security yesterday, and now Personnel. Caveats: I have less knowledge of personnel issues, so take my comments here with a larger grain of salt than usual; and I did not sit in on that group's discussions.

How does Op Laser impact preparedness and readiness? Do we need to think of an increased role for the reserves as we think of potential future pandemics? How is Op Laser impacting the willingness to deploy of both the reg force and reserves? 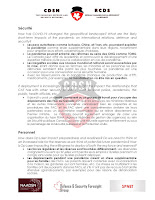 The challenge, as always, is that the Canadian Armed Forces throws at a problem two different groups of people, who have different assets and constraints.  The reservists have all kinds of regular jobs that give them skills that help them interact with civilians and do the non-kinetic stuff mostly better than the regulars.  However, the Regulars live mostly apart from society since their bases tend to be away from the cities, which in a time of pandemic gives them less exposure to the disease.  Deployments, while still disruptive for regulars, are part of their normal cycles.  For reserves, deployments are far more disruptive.  When deployments happen at a time of high unemployment, the reservists are under even greater stress. So, the CAF needs to take seriously how the economic crisis is affecting the reservists (even though it may lead to a boom in recruitments) differently than the Regulars.

The Regulars themselves are under great stress, as schools and day cares being closed means that they do are parenting and schooling and working all at the same time.  And if they are sent to do stuff, like work in elder care facilities, there is far less support for their families than normal.  Like everywhere else, if you want folks to work, you need to find ways to take care of those for whom they are responsible.

The most visible role played by the CAF has been the deployment of troops into eldercare facilities.  Why them?  Because who else can you train and send in significant numbers?  No other organization in government has the numbers to send people into situations like this.  Are these troops trained to handle the challenges of taking care of old, fragile people including many with varying degrees of diminished mental faculties?  Surely, they are not as trained as those they are replacing.  And it also brings in intersectionality--that young men are replacing older woman.  That may have unexpected impacts in the facilities.  Obviously, this is a short-term solution.  One that raises some risks for the force since these folks are being sent into the hottest of the hotzones in Canada (other than prisons and meatpacking plants).  So, this might be the most significant contribution the CAF has performed thus far in this crisis, but it is not without its challenges.

There are more personnel issues that this pandemic has produced, but this is what we had time to discuss.  Why?  Because we were sensitive to the personnel issues of our network--we can't expect large numbers of people to hang around online for many hours when they have kids at home.  Next time we do this, we will probably aim for smaller groups and more focus as we cannot expect people to dedicate lots of time, especially women who are bearing the brunt of the dependent care.