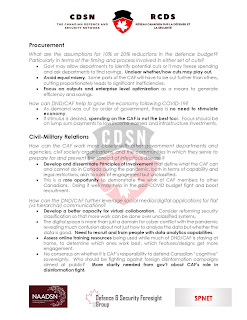 Last week, members of the Canadian Defence and Security Network, along with networks funded by the Department of National Defence (SPNET [Concordia-based group of engineers working on tech-related policy, like AI], the Defence and Security Foresight Group,and the North American and Arctic Defence and Security Network) released a briefing note, based on a teleconference we held via zoom to discuss a series of questions that DND had given us and some we had developed.  I am discussing each piece, day by day.  I discussed Operations on Wednesday, Security on Thursday, and Personnel on Friday. Caveats: I have less knowledge of procurement issues, so take my comments here with a larger grain of salt than usual; and I did not sit in on that group's discussions.

What are the assumptions for 10% or 20% reductions in the defence budget?
Particularly in terms of the timing and process involved in either set of cuts?
• Govt may allow departments to identify potential cuts or it may freeze spending and ask departments to find savings. Unclear whether/how cuts may play out.
• Avoid equal misery. Some parts of the CAF will have to be cut further than others, cutting proportionately leads to significant inefficiencies.
• Focus on outputs and enterprise level optimization as a means to generate efficiency and savings.

The first question was challenging as we have no idea what the government will do in reaction to big budget deficits.  It could be that the deficits are so big that cutting the defence budget is not going to happen--that the deficits will just be lived with.  The Liberals are not a party of Austerity, not these days, so it is not clear that they will feel compelled to cut the budget.  However, the DND/CAF budget is the most cut-able part.  So, the key then is to have a good strategy.  Just cutting across the board is a bad idea--it lives some projects just short of completion, the military without some crucial stuff, and other, less essential projects getting more than needed.  Real cuts would require real prioritizing--what is necessary, what is important but not essential, and what would be good  but can be foregone.  And that would require another Defence Review and another one or half dozen CDSN zoom conferences.
Likewise, rather than just focusing on what goes into the machine, focus on what is produced and how each entity can produce more efficiency to get the most out of the budget.


How can DND/CAF help to grow the economy following COVID-19?
• As demand was cut by order of government, there is no need to stimulate economy.
• If stimulus is desired, spending on the CAF is not the best tool. Focus should be on lump sum payments to low income earners and infrastructure investments.

The economists in our group had no patience with the ideas that (a) Canada needs a stimulus post-covid and (b) spending on the CAF to stimulate the economy.
First, because the economy was brought to a stop by the disease and by governments' decisions, there is less need to stimulate the economy to get it moving.  Opening up the economy will likely suffice.  Second, throwing money at the military does not really have a multiplier effect on the economy.  The procurement projects are slow and focused so one would not see a big, quick boost across the economy.  Throwing money at personnel might help improve employment a bit, but the force is not that big and can't get much bigger without a lot of work, so, again, marginal impact.  Instead, give the $ those who don't make much money--since they will spend it--and build stuff for the long term so that the deficits today are really investments in the future.  That would probably be mass transit (even if that feels icky in age of masks and social distancing) and green projects to reduce climate change-producing emissions.

I think I prefer economists giving answers that are not politically appealing, as the last time they gave one that was, Austerity, it screwed things up for a generation.

Tomorrow is our last post from the briefing note--civil-military relations.

Posted by Steve Saideman at 9:43 AM