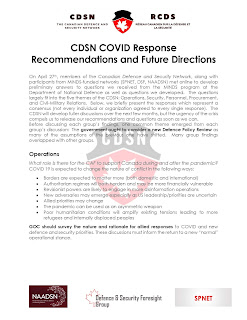 This week, we are giving our response to government and sharing it with the public.  The entire document is available in English and French here. In my blog, I will be discussing the document all week long, with each post focusing on a single theme (the CDSN's research is organized along five--Operations, Security, Personnel, Procurement, and Civil-Military Relations).

So, today, I will focus on Operations.

What role is there for the CAF to support Canada during and after the pandemic?

COVID 19 is expected to change the nature of conflict in the following ways:

·         Borders are expected to matter more (both domestic and international)

·         Authoritarian regimes will both harden and may be more financially vulnerable

·         Revisionist powers are likely to engage in more disinformation operations

·         New adversaries may emerge especially as US leadership/priorities are uncertain

GOC should survey the nature and rationale for allied responses to COVID and new defence and security priorities. These discussions must inform the return to a new “normal” operational stance.

This is the summary of findings from the Operations group.  It is pretty much all bad news.  Let me address each point briefly, with the caveat that I did not participate in these discussions so what I say below should not be blamed on those who engaged in the Operations discussions.

This thing could have gone in another direction--where international cooperation and globalized supply chains could have been utilized to contain or mitigate the pandemic.  But that didn't happen (although NATO, for instance, started slowly and then did much to move equipment and personnel around Europe).  Instead, we saw borders close--that Canada is flipping on its head the highest post 9/11 priority by insisting that the border remains closed for now.  We even see federal units setting up checkpoints to block the flow of people from other federal units (Quebec has done it, Rhode Island and Florida have done so as well).  Now, folks are talking about becoming less dependent on key partners.  This ain't great.  While globalization has caused job losses, reversing it will cause much stuff to become much more expensive.  Taxes will go up if governments have to subsidize domestic producers of PPE, of drugs, and of whatever else.  It seems like the 1930s are repeating--we are learning the wrong lessons of how to deal with these shocks.

Which leads to authoritarian countries facing challenges.  Note how many doctors seem to be falling from balconies these days in Russia.  Tis not an accident that those who criticize the regime's response to the pandemic are being killed.  Such regimes become brittle and hyper-defensive.  The oil war may have worked to hurt American production, but Russia's economy depends greatly on oil sales. So, Russia is far worse off than it was two months ago from an economic standpoint.  Sure, it can still play the role of troll and foster discord in the US (Russia has been behind the anti-vax movement, so it is in a good position to support the anti-science folks who are fighting the COVID policies in the West).   Expect more desperate and ill-considered policies from Russia.

And from China?  Yeah, them, too.  The coverage of China has been all over the place.  No, the US should not be launching a new trade war with China to punish it for handling the pandemic poorly.  But China's efforts to capitalize on American weakness has failed.  The shipments of PPE from China to elsewhere have proven to be problematic, given that much of the stuff was crap-tastic.  Their efforts to blame the pandemic on the US via conspiracy theories may play well in some places, but does much to undermine any effort to portray the Chinese government as a responsible steward of international public health.

The US has utterly failed to lead in this.  It has blamed others, it has stolen PPE, it has refused to show up at major international conferences.  The wounds to American leadership in the world are almost entirely self-inflicted (unless you want to give Russia credit for putting Trump into power).  This provides much space for other actors to cause trouble not just for the US but for its allies.

Allies were hedging before this, but they were doing much to meet Trump's demands for more defense spending, more payouts to the US for basing.  That is probably not going to endure.  Countries will have to cut their defense budgets to cover spending on this crisis.  The good short term news is that the dips in their GDP will make their % of defense spending look good, and  Trump is not curious enough to do the math and figure it out.

Things are going to get worse for those already in bad shape.  Can't socially distant if one is in a crowded camp, can't wash hands if one lacks access to water, and so on.  Canada could make a major contribution by helping those places that have limited resources.

We didn't develop many specific policy recommendations because we really do not know what works.  So, what we do recommend is to learn from our friends (and our foes) about what works, how our allies are likely to respond in the near future, and from there.  There are plenty of lessons to learn--both what to do and what not to do--from those who experienced the outbreak earlier than Canada did.  We need some serious comparative analysis before making major decisions.

Tomorrow, I will address the Security group's questions and responses.

Posted by Steve Saideman at 1:35 PM