COVID: What We Think We Know, What It Means For What We Can/Should Do 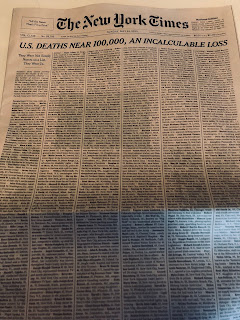 Watching the mass of people cram into bars, onto beaches, and into parks sans masks is driving me crazy.  Watching North American governments fail to make use of the ten or so weeks semi-quarantine is agonizing.  Seems like so much wasted effort and sacrifice.  The New York Times has little obituaries to some of the nearly 100,000 Americans who have died due to COVID.  So, maybe it makes sense to take a step back and figure out what we know and what that knowledge implies.*  Oh, and I lay some blame at the end.


What We Mostly Know:
What We Should Be Doing:
Which Brings Me to Who to Blame:
There are ways out of this--we can learn from the past (the Spanish Flu really is quite useful here), we can learn from other countries both what to do and what not to do (don't be Sweden).  So many people have been so patient and diligent for two or three months.  If we can just develop some new habits--not just hand-washing but mask-wearing--we can limit the spread.  Otherwise, the hospitals will be driven to the point of collapse, the rate of deaths will not fall, and the economy will not rebound.  Even if governments allow stores to open up, most will have a hard time staying open since most people will be sensible and stay home if their neighbors aren't distancing and aren't wearing masks.

Right now, we have a very reasonable fear that the others out there are endangering us.  To get to the time where there are vaccines and reliable treatments, we must do better.  This weekend suggests we will not.  Damn it.

*  No, I am not an expert, and, yes, there is some uncertainty.  New science will beat old science.

Posted by Steve Saideman at 9:23 AM