It was a pretty full week, all things considered.  It included working meetings, online poker fun with friends, a milestone (not a benchmark), and more networking.

The highlight was at the start--I got to zoom with friends from more than 30 years ago.  Folks on facebook organized a reunion of sorts for those who went to Camp Airy in the early to mid 1980s. I didn't know all of those present but I knew most of them, and it was a blast.  It went on for about two and a half hours.  I learned about some stuff that happened near me but not in my presence (a combination of FOMO and phew for some of those), and I, of course, learned what folks have been up to.  The men had more hair than I was expecting.  I laughed so hard over the course of the zoom.  It was a hell of a tonic to start the week.

The business of universities continued.  I met with a graduate student working on his Master's Research Project (one way to get through our program is to write an article length paper), and I attended a dissertation proposal defense (she was successful, so one less student for my proposal workshop class next fall).  NPSIA had a meeting with the teaching and learning folks that impressed me--that folks on both sides are ready, willing, and engaged to teach online as best as we can in the fall.

The CDSN marked its first year by, well, yes, networking some more.  My staff and I met with Justin Massie and Stéfanie von Hlatky, who just received a MINDS Network Grant to fund a Francophone network aimed at improving the bilingualism of Canadian defence conversations:

Réseau d’Analyse Stratégique--Network of Strategic Analysis.  Very thrilled that they were successful and looking forward to helping each other!

The best distraction, other than zooming with friends from long ago, has been online poker with friends zooming in to give each other crap about their poker play.  I brought together the folks who would have played at the ISA in Hawaii in March, and we had a good time.  Much discussion of what their universities were doing and the difficult challenges and tradeoffs facing everyone everywhere.  It was great to see them.  I am now the big winner in the two zoomed pokergames I have played the past two weeks.  I better lose soon or some people might get suspicious. 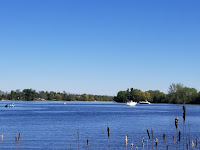 The onset of summer is making a big difference, as it is raising our spirits.  My wife is now covered in dirt, as she can start gardening with frost advisories no longer a thing (as of a week ago).  My bike riding has gotten more frequently, and it is more fun to see folks boating as I ride.  Today, I am going to toss a frisbee with one of my teammates.  Social distancing and hand-washing will take place, as will beer-swilling.

Alas, the news beyond is mostly awful.  Canada's numbers are not going down with some blaming mother's day.  Observance of mask-wearing is more spotty than one would expect up here.  In the US, well, Trump is thinking about testing nuclear weapons because he needs to find more agreements to trash.  Biden, well, oy.  I am more confident that Biden will win--the polls are headed that way--and the Trump Administration seems determined to antagonize those who have been hit hard by this--trying to kill ACA and stop the extra unemployment cash.  The good news is that most Americans are trying to do what is right, and those protesting the mask wearing are few and are being shamed.

Because it was a busy week, it passed quickly.  Usually, I want summer to pass by slowly so that the ultimate lasts longer, the travel and research lasts longer, and the grading is further away.  With this pandemic and the looming election, I am seeking to have time pass by faster so that we can get past this phase.  I hope you and yours are managing to fill the days and nights with a variety of activities and streaming shows.

As always, the only way out is through.  Be well.