New poll out on Afghanistan--how the Afghans feel about their present and their future: 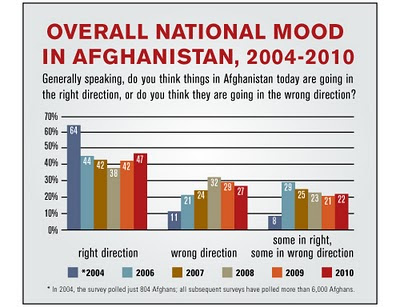 One of the signs of progress: "The proportion of respondents who say they have some level of sympathy with the motivations of armed opposition groups has fallen from 56% in 2009 to 40% in 2010."  Still way too high, but definitely in NATO's right direction. 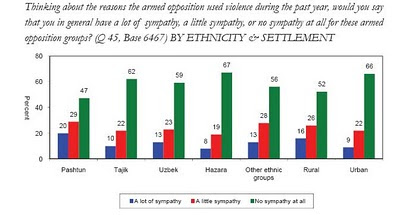 Only among Pashtuns does less than a majority (still a plurality) of folks have no sympathy with armed opposition using violence.  Once again, the key would be the Pashtuns.  Not a surprise, but nicely illustrated.


Most stunning (and important) trends: "Satisfaction with the performance of the national government has risen steadily over the last three years (from 67% in 2008 to 71% in 2009 and 73% in 2010). The 2010 survey records the highest levels of positive assessments of national government performance since 2007 in almost all regions."


Very interesting contrast between views on police and army: 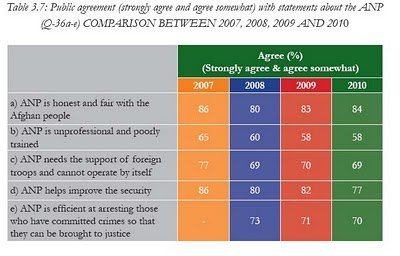 Note that (a) and (b) in the first seem to be entirely contradictory but not in the second.  Hard to be honest and fair and unprofessional and poorly trained.  Possible but unlikely.  Much more consistency in views about the Army.  This suggests perhaps less lying about the army or at least more lying about the police, right?


Of course, there are real questions to be asked about conducting surveys in a conflict zone, particularly one as illiterate as this one.  But these folks have been doing the same surveys for the past several years, so we can be suspicious about specific numbers but the trends?  Seems to me that the survey challenges would remain the same, so that changes in values--trends--actually mean something.  But then again, I am neither a polling nor Afghan expert.
Posted by Steve Saideman at 8:54 AM

Email ThisBlogThis!Share to TwitterShare to FacebookShare to Pinterest
Labels: Afghanistan