It will be fun to see how they turn the biggest book into two movies.  This picture suggests that they are on target: 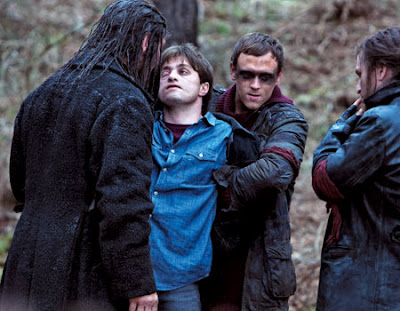 To celebrate Harry Potter month (we have two left--November and next July, I guess), I gave my students in my upper division course a chance to get out of a pop quiz: ask me a Harry Potter question that I could not answer.  But it could not be too picky.  I think they were stunned by my HP knowledge, perhaps even frightened just a bit.  I ruled out questions that focused on a single detail, like a spell or a name mentioned once.  I spaced a bit on Harry's uncle's name, but would have gotten it if I had tried.  I also flaked a bit on Fleur's sister.  But what did me in was the certainty that I would not remember the name of the snitch in Harry Potter and the Order of the Phoenix.  My wife recommended that I not let names be potential questions, but I wanted my students to defeat me.  I was not going to blow any questions on important plot details, knew the patronuses (patroni?) of most folks as well, etc.

Indeed, my favorite question, the one that made it hard for me to breathe because I was laughing so hard, was one that inquired how a professor could have a better understanding of HP than the generation for which it was written.  Fair point!

[Is this post just an excuse to increase the hits on my website by catching folks who are looking for Harry Potter movie spoilers?  Of course not.]
Posted by Steve Saideman at 7:23 PM