The military study of a potential elimination of Don't Ask Don't Tell is starting to leak out.  There is, of course, fodder for whatever argument you want to make, but the key is that "Pentagon study group has concluded that the military can lift the ban on gays serving openly in uniform with only minimal and isolated incidents of risk to the current war efforts."


More than 70 percent of respondents to a survey sent to active-duty and reserve troops over the summer said the effect of repealing the "don't ask, don't tell" policy would be positive, mixed or nonexistent, said two sources familiar with the document. The survey results led the report's authors to conclude that objections to openly gay colleagues would drop once troops were able to live and serve alongside them.

This should not be that surprising given what has happened elsewhere, unless Americans are more homophobic than other folks.  Polls in the US show that the public is ok with it, even the majority of Republicans.* 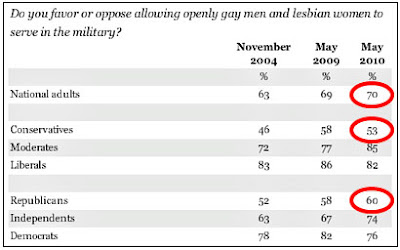 Unfortunately, the GOP is captured by its right wing.  So, DADT is out of date with the attitudes of military folks, of Americans, and even of the majority of Republicans.  And .... That's the fact, Jack!


*  HT to Steve Greene for re-posting this figure.
Posted by Steve Saideman at 8:12 AM