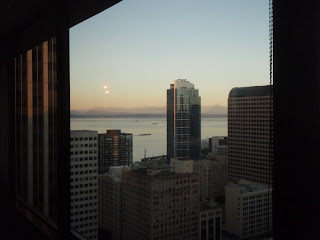 Seattle rocks.  Indeed, it does.  A great place to have a conference.  The city is beautiful, the beer is abundant, the panhandlers are aplenty (one had a very honest sign of $$ for weed), the convention center is very nice, lots of great food.  And great weather.  Next year at New Orleans is not so attractive.

I hope this conference convinces APSA to try some other cities: Denver, Pittsburgh, maybe St. Louis or Kansas City, and perhaps others.  Suggestions?

I learned that there is a building momentum for ultimate at the ISA.  If you are interested, let me know.

I learned that word does get around quickly.  More on that later.

I learned that John Yoo is not popular but neither are those who would interrupt him.  Lots of gnashing about this on the various blogs.  I personally do not go out of my way to hear a torture-justifier speak, would not mind a protest of same, but also would not want to have his free speech denied (as I would not deny free speech to a white supremacist, holocaust denier, or 9/11 truther).  Again, I would not listen, and, indeed, I successfully did not. 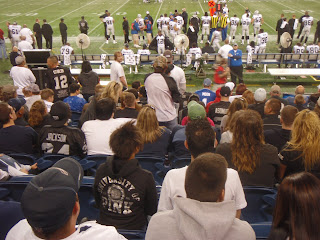 I was reminded that baseball is a great game for a group of friends to enjoy, and that football is actually the perfect spectator sport, as in watching the spectators.  We had plenty of Raiders fans near us, and they were entertaining, if universally, well not that bright.  Especially since some continued to wear jerseys from really awful players (JaMarcus Russell anyone?!).  One Raiders fan seemed to have a maximum of five teeth left.  Glad that we had several fans between us until late in the fourth quarter.

I learned that NFL cheerleaders have really great hair. 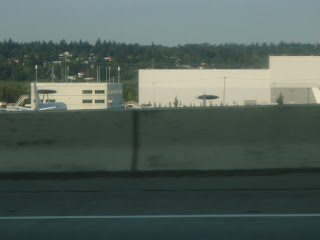 I knew that Boeing was based in Seattle, of course, but was amused to see that their factory/airstrip was incredibly long and right next to the highway.  I was thrilled to see AWACs planes being born as they play key roles in my book with Dave.  You can see them with the blue round dishes in this pic.  In fact, almost all you can see are the dishes.  Better view on the drive from the airport to the city but I was not expecting the sight, so I didn't have my camera ready.

I learned that I have great friends, old and new, although I missed many of the old ones who didn't come to Seattle.  They missed out, not on me, but on a great city.

Oh, and I learned I hate my data plan.  I had to turn my android off and be twitter-less for most of my time there.  My addiction got me jones-ing for some tweets.  Very sad.
Posted by Steve Saideman at 6:57 PM

I haven't been to Seattle, so I can't speak to that, but I'm curious as to why New Orleans "is not so attractive."

NO is fine in the winter/spring, but at the tail end of August/early Sept? Hot and humid with a solid chance of hurricane? This year, there was a tropical storm going through at APSA time.

Last year, I wore shorts (very unprofessional) when APSA was in DC. I might have to go naked for a NO APSA.

Ah. Well, that's why we eat, drink, and listen to good music. It helps keep the heat and worries away. We can't all be so lucky to live in perfect Northern climes!