What is Newsweek up to? 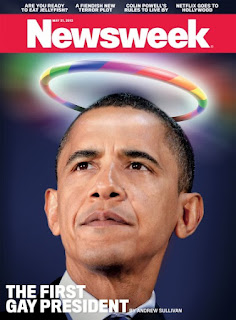 Oh, maximizing controversy and thus perhaps selling more magazines.  I should have guessed.  I wonder which will offend more people: the halo, a rainbow halo or the word modifying President??  Religious types can upset that Obama is depicted as holy: Saint Barak?  They can be upset that the halo has gone from gold, representing .... the sun (or riches?).  Or both.

The funny thing is that calling Obama "The First Gay President" is not the insult it once was, in part because of Obama's stands (however revised/belated) on gays in the military and same sex marriage.  Calling something gay is now a sign of immaturity--something twelve year old boys and bad poker players (as witnessed in online poker on a regular basis) say.  Sure, Cartman says it, but since when has he been a role model?

Of course, the other question is whether Newsweek remembered to consult historians.  Given the 10% rule (or whatever the guess-timate of the % of gay people in the population), isn't it likely that we have had a gay president?  Buchanan?  Anyone else?

The other funny thing is, of course, that the homophobes seem to be populated with men who are attracted to men.  When was the last pro-gay rights married man who was discovered to have affairs with men?  Oh that's right, it is because science tell us that homophobia may actually be related to folks who are insecure about their own sexuality.