Who Goes to the Prom?

There will be heaps of posts about NATO in the next two weeks as things ramp up for the summit in Chicago and not just by me.

There has been much debate about who gets invited to the summit and who attends.  Russia said no thanks, even though much of the previous 20 years was spent developing the NATO-Russia council, which allowed Russia to have some kind of impact even though it was not a member of NATO (because that would really @$#$Q@#$ things up.  France and Greece are hard enough, but bring Russia inside the tent?  Nyet).

Then the story became Pakistan--that it was not invited.  To be clear, if one looks at the list of non-NATO members invited to the summit:
1. Australia
2. Austria
3. Finland
4. Georgia
5. Japan
6. Jordan
7. Republic of Korea
8. Morocco
9. New Zealand
10. Qatar
11. Sweden
12. Switzerland
13. United Arab Emirates
(source: NATOSource)
one feature becomes quite clear if you consult this: 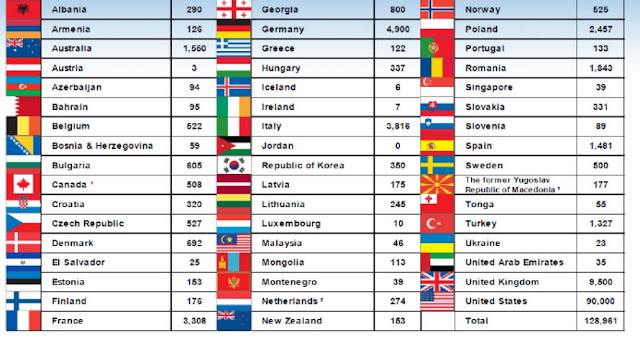 most of the invitees participated in NATO's mission in Afghanistan, a few in the Libyan effort (Jordan, Qatar) or both (Sweden, UAE).  Japan has been supporting NATO via re-fueling in the Indian Ocean, I believe., which leaves Switzerland as an outlier.

Inviting Pakistan, which is apparently happening, would mean NATO should invite Kazakhstan (and a few other stans), India, and Iran as it involves the regional dynamics of Afghanistan.  Pakistan has not (nor should it) provide troops to NATO.  Its support of the alliance effort has been fickle, with questions currently raised about whether the invitation is contingent upon Pakistan opening up the supply lines from the ports to Afghanistan.

Anyhow, the more and more I watch the prep for the Chicago Summit, the more and more I am reminded of academic conferences.  Yes, there is much consternation about who gets invited, but most of the real work for this summit and for an academic conference is ahead of time. The documents/statements/talking points, etc. have all been vetted ahead of time and get stamped at the conference.  In academia, we use conferences to set artificial deadlines so that we feel compelled to finish projects (which works some of the time).  In summitry, the same thing occurs--the appearance of a summit on the schedule sets a deadline for when the various bargaining efforts must end.  The Presidents, Prime Minister and other Principals do not really negotiate much at these affairs--it is a matter of schmoozing.

Which is why I feel less guilty at every ISA and APSA these days where I spent far more time in the bar than attending panels.
Posted by Steve Saideman at 11:45 AM