The Economist has a piece on American higher education.  There is an earlye early mis-step of suggesting that higher ed has two customers--students and government--when much of American higher ed is private.  Oops.  Still, it does present some challenges about the current state of higher ed-more expensive, more debt, mixed outcomes, etc.

At least this piece, unlike others, does keep in mind that universities have multiple purposes,* and on a key dimension, things are not so bad in the US:


On the research side, America’s government has little to complain of. Although several European countries have more Shanghai top 100 universities in relation to their population than the United States does, America still dominates the summit of research: 19 of the world’s top 20 universities in Leiden University’s ranking of most-cited scientific papers in 2014 were American.

The article suggests three: research, human capital and equity.  The first two?  Sure.  But I am not sure that equity is the goal of the US government or of its constituent units.  Nor, to be fair, for Canada either.  Indeed, the insistence on relatively low tuition in Canada is actually not a force for equity since it means that the poor subsidize the middle class and the rich.  If the various governments of the US really cared about equity, they would not have cut support for higher ed over the past twenty or thirty years.  The big force driving up tuition at public schools probably not faculty salaries but more likely to be filling the gap produced by the decline in state government support.

I am not saying that there is not a problem, but that the equity problem is very much one of government policy.  Yes, universities and colleges need to figure out how not to have their tuition outpace inflation (especially for the next three years), but the equity story is as much or more about public policy as it is about management (completely contradicting my first point, right?).

Are students just buying degrees as the article insists?  Yes and no.  Yes, employers seek folks who have degrees in the fields they need.  But with degrees come ... skills, knowledge, an improved ability to think and write and all that.  And the best way to make sure one is paid well in the long term is ... to take a look at the difference in the income of those with those degrees and those without.  Oh, and much of the dip in BA income over the past several years has more to do with macroeconomic dynamics (the recession, the faux austerity measures, problems with firms valuing bonuses to the top folks and not good pay for the average worker) than anything universities have been doing wrong lately.

The article places the blame for the current state of affairs on "shared governance." 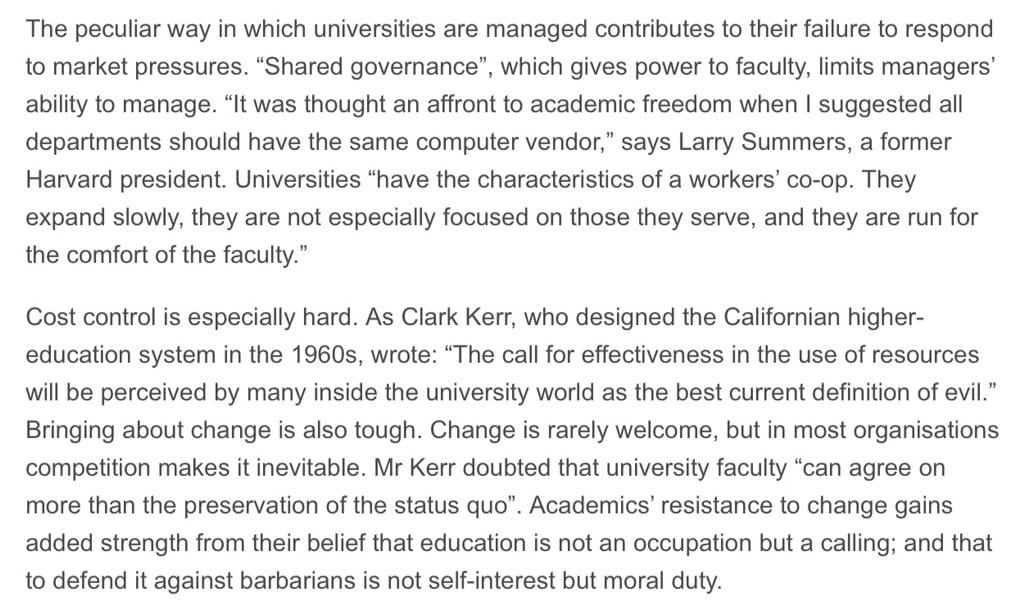 Really?  Profs have that much power?  Yes, tenure restricts the ability for resources to be shifted around, yet we have seen a massive shift over the past twenty plus years in terms of the percentage of classes taught by tenure track professors vs that taught by adjuncts.  The latter are cheap--the pay is low, the benefits are few and they can be hired/fired easily.  So, the managers have actually plenty of flexibility despite the inflexible tenured profs.  The US has little in the way of professor unions (unlike Canada) which means managers have even more flexibility.

Yes, professors and departments resist reallocations from one area to another, just as any entity/group does.  All you have to do is read Machiavelli to get that:


``And let it be noted that there is no more delicate matter to take in hand, nor more dangerous to conduct, nor more doubtful in its success, than to set up as the leader in the introduction of changes.  For he who innovates will have for his enemies all those who are well off under the existing order of things, and only lukewarm supporters in those who might be better off under the new.''

Profs have little input on the big infrastructure programs that can bankrupt schools (UQAM in Montreal, Sweet Briar College in the US come to mind).  The growth in administrative costs are undeniable.  How much of this is needed versus how much of this is not?  Not so clear.  But, sure, we need to do something.

But that something is not for-profit schools, which this piece considers to be threatened by over-regulation.  The experience thus far of such places has been rather exploitative, so one "woots!" when one hears of U of Phoenix hemorrhaging enrollments.  Ok, that one would be me.

The strange thing is that the article concludes that universities are less healthy because tuition is not growing as fast.  Um, isn't that a good thing?  I am confused.  Indeed, I know there is a problem, especially since I am paying American tuition to a private school.  I worry about the future of my profession, but the diagnoses and remedies posed here are really quite lousy.  Ah, the all powerful profs dictating to administration!  If only.