A Rose By Any Other Name

I resisted calling Trump a fascist during the campaign because I never really thought he was all that coherent ideologically.  However, I have felt quite comfy calling Alt Right folks either white supremacists or neo-nazis or just to keep it short: Nazis.  The recent meeting in DC gets most of the attention for the Hail Trump and raised arms in the Nazi salute, but this glosses over the speech that was chock full of white supremacy.

On my twitter feed, I am getting some push back from people who say that these Spencer folks are just one flavor of the Alt Right.  Sure.  Whatever you say.  But the stream of hate (identity politics, anyone?) that Breitbart publishes, that Steve Bannon (its head and soon to be the White House Counselor/Strategist) has promoted fits very well into the label of white supremacist.

Why not use white nationalist?  As a scholar of nationalism and ethnic conflict, I have to admit that white nationalism might fit the bill.  Why? Well, nationalism is usually described as a political movement and identity that aims to have its own state.  And these people want the US to be a white nation, seeking either the expulsion of those who are not white, hence the calls for non-whites to go back where they came from, or the domination of whites over non-whites.

Oh, but it is more than just white nationalism since it is also anti-semitic and anti-Muslims.  So, it is also about religion.   While Muslims can be non-white, they are many who are not.  Jews tend to be viewed as belonging to the non-white category by people who care about religious purity.  Wait, there is also much hate directed towards the LGBTQ community who can be of any color or religion.  Which means that focusing on white nationalism or white supremacy is not enough.  These haters want to reverse the progress made by these various groups, to create intolerance of these differences, and mobilize the "majority" against them.  Does this make them Nazis?  Given their desire for the use of the state against racial, religious and other minorities, seems close enough to me.

The false equivalence machine online was raising Black Panthers, Farrakhan and other "parallels", but whatever else is out there, Nazis are Nazis and deserve our condemnation and contempt and our best efforts to organize against them and put them back under the rocks from whence they came.

Oh, and insisting on calling themselves Alt Right is a handy way to have it both ways--to appeal to their like-minded friends and deny their Nazi stances to the broader public.  I refuse to go along.  Which is why I am mighty fond if this new meme that is going around: 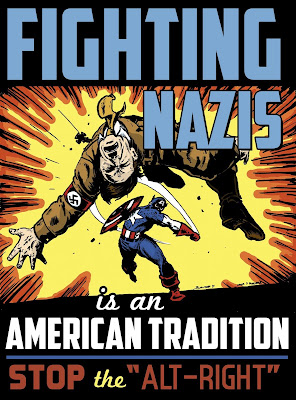 While racism is built into American history via slavery, Jim Crow, #voterfraudfraud, and all the rest, supporting Nazis is definitely unAmerican.  Fighting them?  An American Tradition since 1940-ish (when US started its undeclared anti-submarine warfare in the Atlantic).

Posted by Steve Saideman at 9:46 AM

This will be increasingly popular over the next four years.