I have been seeing this floating around on the internet

and it combines several triggers: a depressing view of democracy, a willingness to sell out or betray those on the wrong side of a line, and, yes, cluelessness about Canada.  Sure, I get it--Canada is wonderful, and Trump's America sucks, but, damn, what a dumb meme that is actually several dumb ideas combined into one.

First, democracy means accepting defeat.  It does not mean submission, but accepting defeat and the moving on to come back.  Yes, Trump is thoroughly awful, and is doing much damage.  But before people even joke about giving up, which is what secession would be, let's give 2018 a try, shall we?  That is, until Trump and the GOP change the rules (which they are trying to do via #voterfraudfraud), how about focusing one's humor and efforts on defeating their legislation (the tax bill ain't law yet) and defeating the GOP candidates in the various elections between now and 2021?

Second, despite all the blue and red maps out there, there are many, many people in the yellow states in that map who do not support Trump nor the Republicans.  I am not just talking about Colorado and Virginia and Maryland but Democrats and independents in Texas and Florida and Arizona and even Montana and Utah.  This map reeks of white liberal arrogance (and I am a white semi-liberal).  What happens to all the brown people left behind in Trump's lesser America?  Right now, the GOP can't revise the Constitution at will, but could if you take out the Democratic bastions of New York, Massachusetts, New England (well, sort of with NH and Maine being shaky at best) and the West Coast?  It also gives up on the dream of the future--the Democrats competing in Texas, winning Arizona and so forth.  Sure, #voterfraudfraud makes that harder, but the future of the GOP is dim unless they learn how to keep their white voters while appealing to non-whites.  Let's not give up too soon, shall we?

Third, Canadians had fun this morning posting a series of things about Canada that would flip out Americans, even liberal ones.  I will not list all of that, but this kind of meme is just wonderfully ignorant about Canada. For one thing, Canada might not want all of these states, as it would upset a variety of power structures--Quebec would fear being inundated by Anglophones, Alberta would fear being marginalized by left/centrist voters and dwarfed by California.  Indeed, a key brake on irredentism are those who would lose by being part of a greater entity.  For another, Canadians define themselves in large part by not being Americans.  So, what would Canada be if one adds in so many people that Canadians are a minority (remember, California is about equal to Canada in population so the math here is quite easy)?  So, there's that.
And then there is the stuff my Canadian friends mentioned--stronger unions than American are used to, far more tolerance of cartels, some limitations on free speech, that whole constitutional monarchy thing, bags of milk (ok, that is an Ontario/Quebec thing), too much damn hockey on SportsCentre, the metric system and on and on.

It is easy is to idealize Canada from afar, but, despite what liberal Americans might think, it is not just a colder version of Washington (the state) and Vermont.

Sure, I am crapping on a silly meme.  But it helps to breed yet more ignorance about both American democracy and about Canada.  So, don't mind me when I put a 😠 on your facebook feed when you post it. There are far funnier, more apt memes that one can circulate in one's annoyance that the awfulness that is Trump and the Republican Party.  For instance: 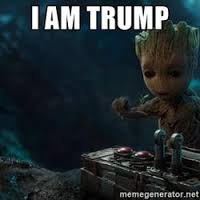 Posted by Steve Saideman at 4:29 PM