Folks who pay attention to me (ok, my Mom and a few others) might notice a contradiction: I took great delight to see Flynn flip on Trump and the Cult of the Corrupt yet I also don't think impeachment is going to happen.  How to make sense of this? 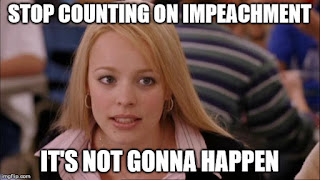 To start, as I have said before, I don't think impeachment is going to happen.  Ryan and McConnell control the agendas of both houses, so impeachment can't get going.  If the Dems take back both houses in 2018, which is unlikely but possible, then the Dems would need to flip 15-16 or so GOP votes in the Senate as the impeachment requires a majority vote in the House but 2/3s to convict in the Senate--see Bill Clinton. Oh, and the GOP is not going to impeach Trump because they need his core voters and impeaching Trump would alienate them for a long, long time.  The tax cut vote suggests that these GOP folks are not profiles in courage.

Anyhow, why I am happy about Flynn flipping?

First, I am trying to avoid that whole hobgoblin of little minds.  [Oh, and if I had bet on Flynn getting indicted/arrested in 2017, I would be a bit wealtheir]

Second, schadenfreude is a thing.  I am taking joy and happiness from the suffering of bad people--Flynn, Flynn Jr, Jared, Don Jr, Trump.

Third, all this stuff is eroding support for Trump with the latest polls 33 in favor, 62 against in good economic times.  He is more underwater than Trump inc.  And this matters because while it might not lead to impeachment, it makes it harder for GOP folks to stand up for and support Trump AND

Fourth, to win in 2018, the Dems don't have to make the entire GOP leave Trump, but if it can get a small percentage of those who would otherwise vote for their rep to either not show up or vote for someone else, then the Democratic wave can be a thing.  While that might not get us impeachment, a Democratic majority in the House and/or Senate would make it much harder for the GOP to do damage like they just did with the tax bill.  That stuff can't get reversed until the Dems have both houses and the White House, but they can be more effective at blocking stuff after 2018.  Oh, and they can start investigating Trump and his team of corrupt arsonists day after day as they then would control the agendas of the relevant committees.

Fifth, only Trump is protected from prosecution before being impeached (and maybe Pence?).  Don Jr., Jared, and other awful folks (Ivanka, pretty please) can be prosecuted.  Notice that this batch of info does not include money, but I am sure that Mueller is tracking the dollars, just as he did with Manafort.  So, h/t to my brother for reminding of this one.

Sixth, there is that schadenfreude thing again--Trump and his folks are so thoroughly awful that, yes, I want to see them suffer.  And nothing causes Trump to suffer more than to have low popularity ratings and to be welcomed everywhere with chants of "lock him up."
Posted by Steve Saideman at 9:48 AM