Interesting story about the most prominent female superhero: Wonder Woman.  J. Michael Straczynski, who was the guy behind Babylon 5, has revised her origins and the artists have revised her look.  There has been much talk about a WW movie, originally with Joss Whedon behind it, but so far not so much progress. 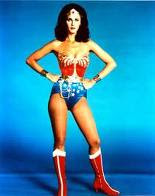 I didn't follow Wonder Woman much in the comic books (which will appall an Aussie friend of mine), but in the great divides of the world (ex: John/Paul; Stones/Beatles; Jacob/Edward), I made mine Marvel and not DC.  So, I was a big fan of the females in the X-Men (Phoenix, Kitty Pryde, Storm, Rogue) rather than collecting Wonder Woman.  The TV show, on the other hand, came along at the right time--the mid-1970's.  Well, the right time for this guy.


“She’s been locked into pretty much the exact same outfit since her debut in 1941,” Mr. Straczynski wrote. “If you’re going to make a statement about bringing Wonder Woman into the 21st century, you need to be bold and you need to make it visual. I wanted to toughen her up, and give her a modern sensibility.”
He added, “What woman only wears only one outfit for 60-plus years?”


Mr. Lee has drawn his share of sexy superheroines (the X-Men’s Rogue among them), some in skimpy costume, and knows what many fans will ask: “Why am I covering up her legs?” Ultimately, he wanted her to look strong “without screaming, ‘I’m a superhero.’ ”

The punchline of the piece is a depressing one--Wonder Woman is not in the top 20 of sales.  But then again, I guess I am partly to blame.  How about you?  And making her more universal with less American Flag-esque and less leggy costume, is that going to make things better?
Posted by Steve Saideman at 8:23 AM