Best Military Prank of My Life

Since it is April Fool's Day, and I am inspired by the Great  Abu Muqawama and the US Army (see the new Army headgear to the right), I will relay to my readers the greastest prank I played on the US military.  Ok, my only prank. So, it is also my worst prank.  Anyhow:

During my entire year in the Pentagon, my immediate boss, Colonel C, teased me about my appearance as a typical frumpled university professor (as one Balkan official was described in one of the non-wikileaked cables).  By the time I left, I would be straightened up, he repeatedly said.  He was referring to my long hair (long for the military, short compared to the rest of the planet), my beard, my less than fully pressed suits (yes, I do know which end of an iron to use, but I tend not to bother), and that my shoes would be shined.  Neatness has never been my forte in my writing or my appearance, so I was an easy target, especially so for a career officer.

Colonel C retired towards the end of my year on the Joint Staff. For his retirement party, I showed up with a crew cut, clean-shaven, wearing a pressed set of bdu's (battle dress uniforms), and some shined boots.*  I was literally unrecognizable.  Members of my office drove past me, wondering who the new guy was that was helping out at the party.  The Colonel was stunned to realize that the new guy was the old frumpled academic minus the wrinkles, beard and extra hair.  Not quite as bold as our AF Colonel (who used to fly for Special Ops) who dressed as a bunny on Easter, but still pretty cool.


*  Yes, I could have been shot for impersonating an officer, if such folks get shot anymore. 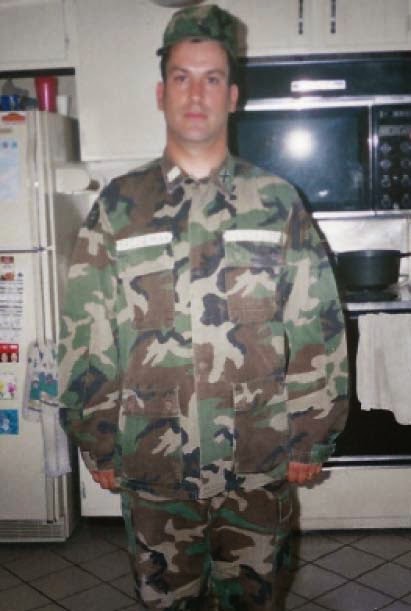 Why did I fit in well in the Balkan pit of despair as our office was known?  Because I was quite able to take the friendly abuse of the military guys AND fire back. And I was willing to take many racquetballs in the small of my back.
Posted by Steve Saideman at 10:49 AM