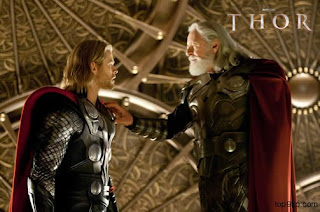 I took the family to see Thor today.  This is part of my grand plan to see heaps of movies this summer yet avoid 3D as much as I can.  Of the three Marvel superhero movies this summer (Captain America and the new X-movie are the others), I was least excited about Thor.  I don't think I bought more than a handful of Thor comics in my youth, and I only sporadically followed the Avengers.  I did read some about Norse mythology way back when, so I am familiar with Odin, Thor, Loki, the rainbow bridge, Asgard and all the rest.  I knew that the movie would face a greater challenge than the other ones, since Thor is, after all, a god.

So, how did they do?  Spoilers beyond the bridge break:

They did surprisingly well, but that is shaped by the low expectations we had.  They changed Asgard from being a realm of the Gods to being a realm of super-powered aliens, more or less.  Actually, they went back and forth with it, but did ok in visualizing and explaining Asgard.  The movie had the big characters from the comic books, including the Warriors Three (including my favorite Roman) and Sif (a hot female warrior), Frost Giants, Loki, Odin (played by Sir Anthony Hoplins), his wife Frigga (Rene Russo, aging very, very well), Idris Elba as Heimdall (the gatekeeper) plus Natalie Portman as Jane Foster, Kat Dennings as comic relief Darby, and Stellan Skarsgård as a mentor to Jane.  The movie was on Chris Hemsworth's stout shoulders and he did well with a difficult part.  Thor is supposed to be an arrogant brat, and Hemsworty carries it off pretty well.


The biggest problem in the movie is that the events take place over a couple of days.  So, lots of things have to happen quickly: Thor has to be humbled and learn his lesson that he needs to be patient; Jane has to fall in love with him, and Loki has to do the trickster stuff.  The funny thing is that the hardest to pull off is the falling in love so quickly thing.  Portman mostly pulled it off, which made me lament--where was this Portman during the Star Wars prequels?  How could she convey falling in love so well to a guy she knows for only a day or two but could not for a role where she knew the boy for many years?  The family conclusion: bad writing and directing.


The other funny thing is that Portman actually gets the most laughs, not Kat Dennings (who is good here with little to do and excellent in other stuff).  The movie had more humorous moments than I was expecting.  The action varied from being very good (nice realization of Thor and his happy hammer) to not so good (lots of action stuff happened in such narrow cuts that it was hard to see what was happening.


The plot itself was ok.  I did not expect much, but was entertained.  The after the credits bit was not as much fun as the others after Iron Man I and II and the last Hulk.  I expect the other superhero movies (including Green Lantern) to be much better.


Update: Gawker has a formula: (Origin Story + Meaningful Conflict) X Awesomeness of Powers - (The Number of Villains X The Number of Sidekicks) ÷ Amount of Time Spent on the Love Interest = The Quality of the Movie.
So, how does that work here?
Which produces [(7+8)* 8 - 2.5*4]/2.5 or 44, which is much lower than the X-Man example in the Gawker piece but much higher than Iron Man 2.
Posted by Steve Saideman at 6:13 PM