The NYT had an interesting piece on defense cuts that must occur for any serious deficit cutting to occur.  The graphics show the trends in spending: 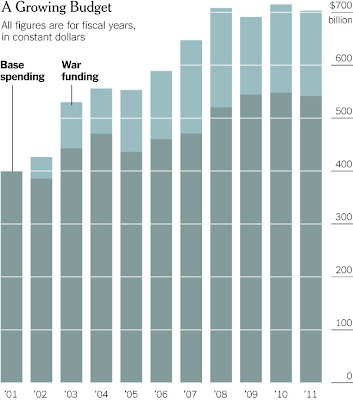 The first shows quite clearly that the "easiest" way to get back to a normal spending level is simply to stop funding war.  Getting out of Iraq will eventually pay off, once the US un-surges from Afghanistan.  War is simply expensive, but Bush, unfortunately, did not feel he needed to pay for the wars he started.  Iraq was especially expensive and will be for generations due to the injuries incurred by the Americans who fought it and survived (the US will not be paying the bills for other countries' veterans).
This picture also makes its clear why there is some urgency about getting done with Afghanistan.  But that is a bit harder to do simply because there is not a reliable partner to take over (yes, Karzai makes the Iraqi folks look reliable).

So, war will continue in Afghanistan.  Libya will cost some but not nearly as much.  What else to cut? 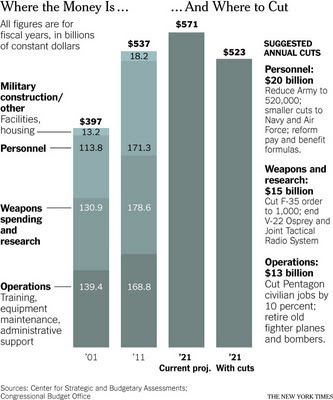 Here is where the tradeoffs get hard.  If you want to cut the numbers of planes purchased, do you also want to cut the older planes?  Is upkeep of those more or less expensive than the maintenance of the new planes?  The A-10 is an old, old plane but a unique platform for doing precisely the kind of stuff that needs to be done--air to ground attacks.

The other really hard part is reforming pay and benefits.  Mostly because there are entrenched constituencies for this kind of stuff--making the soldiers and sailors and marines and air-folk pay more for their benefits is deeply unpopular with them and their pals in the Congress.  It is funny that I resist Verizon's efforts to make their workers pay but not so much efforts to make the folks in the armed forces pay.  Perhaps because Verizon execs are getting paid far more than the President, SecDef, Chairman and the like.  Anyhow, tangent aside, the challenge is that it is easy to recommend stuff to be cut, but it is hard to figure out ways to make cuts politically possible.  Policy experts need to think more about step b (underwear gnome's shoulder shrug) between policy recommendation and policy outcome.

Good thing my job is simply to point this out rather than come up with ways to convince Congress to make hard decisions.
Posted by Steve Saideman at 7:58 AM