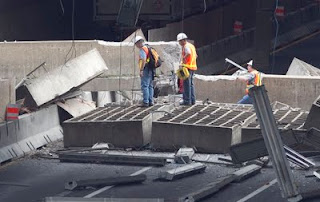 One of the questions that comes up whenever a Montreal piece of infrastructure collapses (and yes, it does seem to happen often) is: don't they inspect these things?  Yes, yes, they do.  They just don't do anything about it.  The tunnel that collapsed this weekend was found to be in deep trouble three years ago, but nothing was done.  Actually worse than nothing as repairs on the sides of the tunnel, including using high pressure water blasting the sides, may have actually destabilized the ceiling of the tunnel. 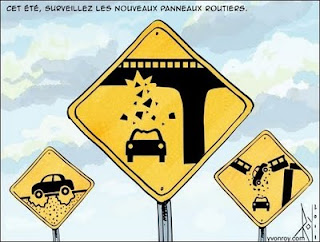 So, we have a two part process: ignore the results when problems are found; go ahead with some efforts to fix but ignore what these efforts might do to the rest of the tunnel.  What this tells us, as if we did not know before, is that there is something deeply and SYSTEMATICALLY wrong with Quebec's political system that allows infrastructure to fall into such a state of disrepair and then the lame efforts to deal with this problem end up causing more problems.  This would be stunning if we were not already stunned already by the previous events and revelations.

The newspapers, including letters to the editor, are clear that we understand that there is no accountability in Quebec.  The transport ministry has tried to cover things in secret sauce by claiming that documents cannot be released as they would affect bidding, or because the civilians would not be able to understand them.  But the larger dynamic is that of nationalist politics.  Elections rarely turn on good governance or its absence but on the nationalist issues of the day, whether it is hating immigrants a few years ago or on separation.  So, politicians are not held accountable for the rubble in the streets, whether the rubble is from collapsing bridges or from World War I battlefield-like potholes.

While the Parti Quebecois is now criticizing the provincial government for being opaque about this stuff, I have no doubt that they will focus more on how best to get my daughter out of English schools when they come back into power, rather than on fixing the roads, bridges, tunnels, etc.
Posted by Steve Saideman at 9:27 AM

Is there anyway to share a post's link on twitter/fb other than pasting the link directly in?

What about the Mafia?