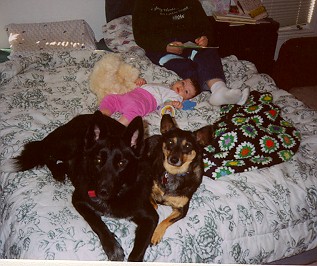 For the first time since 1992, my family is dog-less.  We got Flynn (the smaller one) shortly after we were married from a shelter in San Diego, and we got Tessa (the larger one) shortly before my daughter was born.  Flynn died a few years ago while I was away at a conference.  We had to put Tessa to sleep yesterday after she handled a week at a kennel rather poorly.  We usually used dog-sitters so that they would not have to endure the stress of a kennel, which, in our minds anyway, is too much like the animal shelters where we found them.

But Tessa was about 17 and was starting to lose the ability to stand and to walk even before we went on vacation.  Indeed, we faced a few points over the past six months when we thought about doing what we had to do yesterday.

Flynn was clearly my favorite of the two, with Tessa being more neurotic, especially early on.  Flynn was simply too cool, with our move from Vermont to Texas producing many sad-faces in New England.  He had charmed not only all the large female dogs in the townhouse development but also their owners.  Tessa was still a sweetheart, and she will be missed, even though she used to wake up the baby long ago by barking at any time a leaf flew by the front of the house.

I post this not to get more sympathy--facebook provided aplenty--but to explain why blogging has been infrequent lately.  Losing Tessa will greatly simplify our lives and save us a fair amount of money, certainly, but she will be missed.  Perhaps Game of Thrones will show more of the black Direwolves next season to remind us of Tessa as Friday Night Lights briefly teased with a Flynn-esque Skeeter.

And, no, we will be getting any more dogs.  We loved the dogs we had, we love the ones we encounter, but we hope to travel more in the next few years.  We were glad we could save a couple of shelter dogs, including one that had clearly been abused, giving them really, really long lives.  If you like dogs, get a shelter dog.  Pure-breds are for Slytherin.  If you want a dog with character and heart, get a Gryffindor or a Ravenclaw or a Hufflepuff at a shelter near you.
Posted by Steve Saideman at 4:32 PM

Nice article, thanks for the information.

1) I cannot believe you are giving up on being a dog person after all these years. Though, seems like your dogs have been more trouble than most (like most things in your life).
2) Pretty sure the first comment here is spam.

The funny thing is, a lot of purebred dogs end up at the shelters too. So if you really want a purebred, you may be able to find it much more cheaply at shelters. Some shelters will even let you get on a waiting list for a breed. And the breeding world has itself turned to mixes, like cockerpoos, etc., and those are at the shelter too and you won't be paying $800 for them. This is not to knock all breeders, but I was practically raised in my county animal shelter because my mom worked there and so a shelter family we were, and Bob the cat from one too. But Jessie is almost grown, and my knees are creaky, so no more dogs, cute as they are.