Given how nasty the war has been in Afghanistan, I guess it is only appropriate that this cartoon in the NYT today is brutally funny: 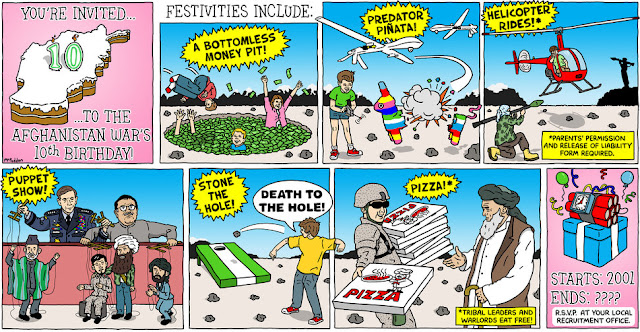 Not sure I get stone the hole, but otherwise, oh my.

Of course, when people say ten years or longer than the two World Wars combined, it frustrates me because the effort has been inconsistent at best.  Canada went it, came out, went to Kabul in a relatively light stability op, and was in Kandahar with a relatively small contingent (historically-speaking) for five years or so.  The US?  Treated Afghanistan as a sideshow from 2002-2008.

Still, ten years is a round number, so it will resonate more.  So, any other suggestions for party games?  How about "move the omelet" as in spoon race with not just an egg, but a delicious concoction of egg, peppers, onions?
Posted by Steve Saideman at 9:12 AM