Halloween at the Park

I have never gone to an amusement park in the fall.  Busch Gardens was set up for Halloween in a big way.  So, I invested in the quick access pass for the afternoon and evening--a smart idea since the place was more crowded than any big park I have ever seen.  People will still coming in as I was leaving at 8pm.

Anyhow, at 6pm, various parts of the place turned a bit "darker" as they said: scary clowns, butchers wielding chainsaws that made real noises, guys stitching themselves up, and so on.  I went to two of the five haunted houses (I was getting tired, and one of the houses had paused due to a girl who apparently sprained her ankle).  BG did a nice job of taking buildings that were in progress or stages and filling them with creepy folks--themed so one was vampires, one was just creeps.  Some shouted and jumped out, some just walked behind you and touched your shoulder, and so on.  Pretty scary stuff. 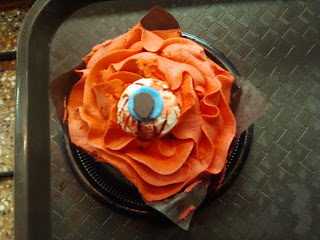 The basic theme was Gardens in the Dark, with the key illustration a rose with an unblinking eye in the middle.  And, of course, this compelled me to buy this cupcake:

It was a heap of fun.  The strangest sight were the scantily clad young ladies that were part of a dance show.  Their moves and their appearance at 2:30pm were, well, a bit unexpected.  I am not a prude, but the sexy nurse costumes were aa surprising thing to see.  And their moves were, well, wow.  Parental-guidance indeed.

The other surprise was the Pirates 4-D show--a movie with Leslie Nielsen, Eric Idle and Rodney Dangerfield.  Yep, it was old but fun.

Anyhow, I had a great, long day, a silly way to wrap up the book project.
Posted by Steve Saideman at 10:28 AM


Hi Saideman, You can definitely see your skills within the work you write. The arena hopes for more passionate writers like you who are not afraid to say how they believe. All the time follow your heart.