The Pop Social Science of Ewoks

I most enjoyed one piece of this week's How I Met Your Mother: Barney was using Ewok appreciation as an indicator of age.  Those over a certain hated Ewoks, those under loved them. 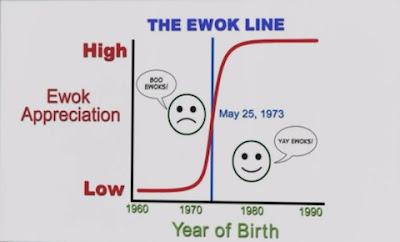 This site has a bit more detail on the discussion.  I always felt conflicted over the Ewoks as Return of the Jedi had some great scenes (It's a trap!), but the Ewok battle seemed just a bit too cute.  And yes, I am on the left side of the age line.  Worse, the Ewoks set the stage for ... Jar Jar.*  Some would trace the worst parts of Return to the worst parts (the majority) of the prequels.


* I could not watch more than a few minutes of the 3rd Transformer movie as it had two JJ like transformers serve as pets/pals/major annoyances for the Shia Leboeuf character.

I appreciated this discourse on Ewoks because I guess I had never considered how different generations viewed them.  I have thought about the correct way to show kids the series, with Star Wars, Empire, Return before the prequels, as it was intended, so that Empire ends with the big twist.  But not about pro vs. anti Ewok generations.  Hmmm.

While HIMYM has had its ups and downs, I have appreciated its Seinfeld/Friends-esque element--having characters with competing theories of social behavior and then seeking to test them.  Barney often does this by himself, but more fun when he faces competition.
Posted by Steve Saideman at 7:18 AM