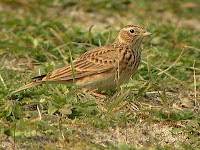 Imagine Queen's We Will Rock You (or just hit this link). Then picture a pretty aggressive bird.  Maybe an Alouette.  Ok, first some context. 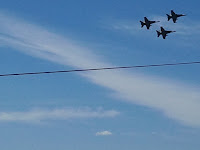 Today, I spent the day at Bagotville Airbase, as part of a Canadian Department of National Defence junket.  I joined the trip because I was hoping to meet some folks who had served in the effort over Libya (Op Mobile) and get some info that might help write the conclusion (and perhaps the intro) of the NATO and Afghanistan book.  Plus tomorrow there is an airshow, so I got to watch some practice runs today while I was moving in between briefings.

Anyhow, the base here is located near an aluminum plant that used to belong to a company with Alouette in its name.  As a result, the symbol of the 425th Tactical Squadron is the Alouette and its symbol includes this motto: "Je te plumerai."   This is, of course, from the song.

The question, of course, is whether "plucking" is aggressive and threatening, as a tactical air unit should be.  I guess having one bird rip out the feathers of another is pretty nasty.  Because it is in French, the word that rhymes with pluck is not so operative.  When I realized what plumerai was referring to, I could not help thinking about Queen singing, We Will, We Will Pluck You!  And then, of course, an old version of the song: