Short Note on Why NATO

During my DND junket to Bagotville, I was reminded that for all of the grief that NATO gets (and I give it plenty myself), we must remember that while governments develop all kinds of rules that give each contingent its own rules of engagement, the units themselves are far more inter-operable than they would be otherwise. 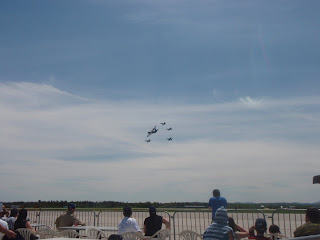 I briefly talked with an American pilot who was there to show off his KC-135 at the airshow (pic to right shows simulated fueling).  He just spent much time over the Mediterranean re-fueling American, Canadian, British, French, Danish, Norwegian, and Italian jets (and perhaps others).  Mid-air re-fueling is not an easy task where a fighter can just fly up and say "please, sir, can I have some more ... fuel?"  It requires compatible equipment, common doctrine, heaps of training and practice.  I somehow doubt that there is much mid-air refueling for the non-NATO members of this mission since they have not had literally decades of effort on inter-operability.

Another NATO contribution:  getting communications, command and control up and running very, very quickly so that the various platforms (intelligence, air-to air, air-to-ground) can be tied together.  Having dozens of planes in the air from many countries in the same airspace is not easy.  There is apparently no regional division of labor (no equivalent of regional command south or east or north like in Afghanistan) as Canadian planes fly all over Libya, not just in one part.  This complexity is under-rated by outside observers, but is smoothly handled by the organization.

So, there is my NATO cheerleading for the day.  I will go back to criticizing tomorrow (or later today).
Posted by Steve Saideman at 9:44 AM

Steve, you wrote "There is apparently no regional division of labor (no equivalent of regional command south or east or north like in Afghanistan) as Canadian planes fly all over IRAQ, not just in one part. "

Do you mean Libya?

Ooops! Will correct. Thanks!