I am recovering from a day at an airshow.  It was a lot of fun and actually quite productive as I had conversations with two officers with interesting experiences--Afghanistan and Libya.  So, I think I blew Canadian tax dollars in a productive fashion.  And got a bag full of swag at the same time.


So, what did I observe during the course of the airshow? 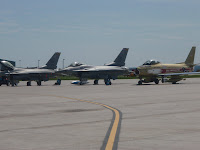 I am beat but I learned a great deal and had a good time.  I do love my job.
Posted by Steve Saideman at 5:46 PM

Ditto on the visceral thrill of a plane blasting overhead. One of the coolest things I have experienced.