I have been in Australia since Sunday, but today was the first real day of tourism.  I spent the past couple of days at a workshop on civil-military integration in the various efforts by the outsiders (and some insiders) in Afghanistan.  Of course, we disagreed about what we meant by civil-military stuff.  The fun part was when my paper was entirely ignored since it shared the same session as a paper on the New Zealand effort that most of the audience found to be too positive.  I guess I hit the sweetspot of being critical yet not entirely negative. 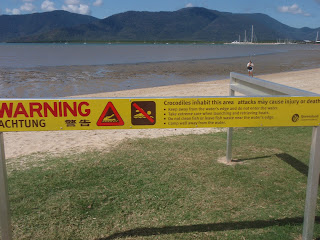 Anyhow, I spent this morning flying to Cairns and this afternoon walking around the town.  No crocs seen thus far.  I did see a lot of places for backpackers and even a few actual backpackers.  the weather is a nice change from "winter" in Canberra, which did get somewhat cold. If I was not not acclimatized to summer in Montreal, I would be laughing more at what they consider to be winter.  Still, Cairns is a very nice contrast.

I do have a few questions about Cairns and about Australia.  First, why is the second biggest language here German?  Is Cairns a major destination for German tourists?  Just curious.  Second, why was John Travolta introducing the Qantas safety instructions?  Do Aussies have too much respect for American accents?  I ask this because Simon Baker, an Aussie, is in various ads for a bank, dressed like his Mentalist character and using an American accent.  Why would an Australian actor be using a non-Aussie accent for an Australian audience?  I am confused.

One thing that does not confuse me: why Richard Branson is rich.  Virgin Australia airlines charged for water since all they had was bottled water and for the TV programs.  I guess I prefer having no choice and free entertainment than charging for it.  The other strangeness of travel today was having to walk through the "car park" to get from one terminal to another in Sydney.  Good thing it was not raining.  Oh, it was.  Never mind.

Still, minor complaints as I am squeezing in some fun tourism after a productive and interesting workshop.  Especially since tomorrow I will be diving for the first time and exploring the Great Barrier Reef.  Of course, the Aussies have been telling me that I should make sure that the diving boat does not leave me behind, since there have been a few recent stories about such things happening.  Open Water apparently was not sufficient to scare dive boats into keeping track of their divers.
Posted by Steve Saideman at 7:43 AM