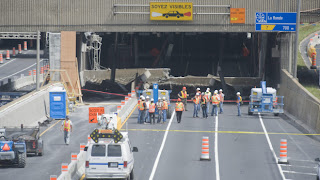 It is all about timing--don't be on a bridge as it collapses, don't be in a tunnel when 15 meter hunks of concrete collapse.  Seriously.  We were not going through that part of the tunnel this weekend (twice) for the comedy festival, as our exit was right before it-where there was yet more construction.  But to get to the other side of downtown--to the TV stations where I did media (when they still cared about Afghanistan), to the distant frisbee fields (before I stopped going to such distant fields because the construction and traffic became too insane), to La Ronde (the Six Flags park), one would have to go through this tunnel.  And to get to downtown itself, there is an earlier tunnel segment right before this exit that is made of the same material--crappy.

The city and province were so lucky that no one was under the concrete when it fell as it is a busy highway.  The sad thing is that no one will hear the alarm bells that this event will ring precisely because they are deaf from all of the other bells already ringing.  Oh yeah, one reason to take this particular road is to get to the one bridge that is more or less okay since the other two major bridges that are on the other side of this tunnel are falling apart.

I rely for worktime commutes on the train system.  And now I will simply avoid driving through downtown unless I absolutely have to do so, as I have no reason to expect that the city and province will provide a durable solution to the collapsing infrastructure.  The big concern is figuring how to get to New York for our summer vacation with the bridges falling apart.  The alternative of going west and then east adds much time, but going on a bridge or through a tunnel as they collapse might mean far less time ... on the planet.
Posted by Steve Saideman at 9:10 PM