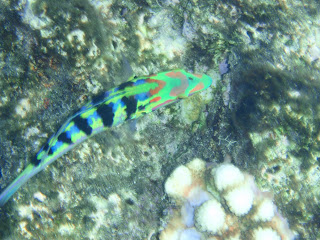 Day 2 of Cairns was almost entirely at sea, and I mean that in a good way.  I had my first diving experience and I learned many things.  First, don't dive and then fly.  Apparently, one could die in a  pressurized cabin with bubbles doing magical things to one's circulatory system.  So, instead of two dives, I went on one so that I could fly 18 hours later.  Second, it really was not hard to keep breathing.  So much easier to dive than to snorkel.  I did a fair amount of snorkeling after my dive, and I sucked in more and more salt water as the went along.  Third, it was a heap of fun.  Saw plenty of colorful fish and even some colorful coral even if the reef is not what it once was. 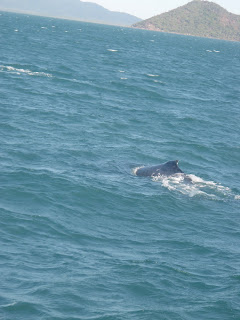 I only realized while walking back to my hotel how similar this diving experience is to skiing.  The boat took 1.5 hours to get to the reef, just like it takes about the same amount of time to get to good skiing near my house.  Both require heaps of expensive equipment, and both can kill you.  Oh, a big difference: no whales on the way home from skiing: thar be humpbacks.   Pretty stunning.

So, a good couple of days after two days of conferencing.  Tomorrow, I get to live through Friday, July 21st twice--makes me think of time travel every time I come back from Australia.
Posted by Steve Saideman at 6:43 AM