Out of the Comfort Zone

It was a strange day for the residents of Spew-ville.  I was asked by the folks at Carleton to attend the Canadian-American Business Council event in Ottawa.  Carleton had paid for half a table, and wanted me to be one of the folks who attended.  While I am applying for a grant to build a Canadian network of folks who do/study civil-military relations, I am not that great a network-er, especially in a crowd of business folks.  At conferences, I almost always network sideways or down, so I only inadvertently am connected with any of the bigger names in the profession.

Anyhow, it was an interesting event that I had to cut short because of a class in the afternoon (meaning that I missed my first chance to be in the same room as Canada's Prime Minister--Stephen Harper). The first major event was where the two Ambassadors and a former Ambassador chatted about US-Canadian relations and the election.  I seem to be in the same room as the US Ambassador every other week these days.  Anyhow, I was strongly tempted to ask these folks how long the street cred Canada earned the hard way will last, how long is the American memory, but I forgot what I wanted to ask.  Perhaps because I was still thinking about the song they used to introduce the panel.

The next speaker, Jim Prentiss, who used to be in government and is now Vice Chairman of CIBC (bank), spoke about US-Canadian trade relations, and argued, pretty convincingly, that relying solely on the US market to sell one's energy stuff is a bad idea.  It means Canada ends up earning less.  Anyhow, interesting times ahead. 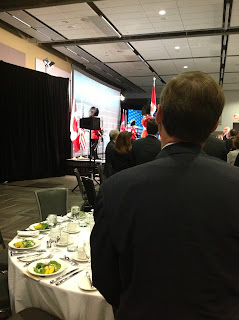 Then off to lunch.  Which was remarkable in the sense that I have some remarks about it.  They had four of the Governor-Generals Foot Guards march in the flags.  Then they had a guy sing both national anthems.  I could not help but note the strange juxtaposition of a guy singing a song inspired by a key battle of the War of 1812 (which the Canadian government pays for ads on TV about the US invading Canada [before Canada existed]) with Canadian uniformed folks with guns behind the singer.  Hmmm.  That kind of activated my American nationalism just a bit.  Then my multicultural Canadian nationalism was activated when the Canadian national anthem was song sans francais.  Usually, folks since part of it in French and part in English, but not today.  Holy faux pas!

The first lunchtime keynoter was the Chairman and CEO of Imperial, who indicated that the anti-oil and anti-oil sands folks didn't know what they were talking about, given new technological developments.  I was thinking of fracking and of oil flowing out of a broken platform in the Gulf, so I was not too persuaded.  I had to leave during the discussion with Nancy Gibbs, who wrote a fun book about the The Presidents Club--how the ex-Presidents work with current ones.  But class was a-calling.  Nice to be able to zip from this interesting event to my office in about ten minutes.  Ottawa rocks.  Gently.

Overall, I was completely out of my comfort zone, but enjoyed the strange experience.  But this tale explains why blogging has, well, limited today.  Also, I was prepping my Thanksgiving thanks posts here and at CIC that will go up Wednesday and Thursday respectively (yes, different posts for different audiences, but same gimmick for those short of imagination/inspiration).

Oh, one last note--the Toy Story song was not the only odd choice.  They played this a couple of times:

They "used to"?  Is this a slap at the British or the US or both?  Should have been Vertigo, given how I was feeling.

Posted by Steve Saideman at 7:35 PM

Email ThisBlogThis!Share to TwitterShare to FacebookShare to Pinterest
Labels: us-canada