I spent today, the day after a two day conference in Williamsburg, checking out Jamestown where America began.  I could not help but think of a few things while going through both the Jamestown Settlement Museum which has re-creations of the first colony and the actual site of Jamestown  which has much archaeology going on: 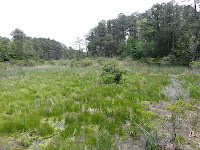 Anyhow, I learned much and remembered stuff that I learned but had forgotten.  I had forgotten how Jamestown nearly failed, with less than forty of the one hundred plus surviving the first year.  The location of the settlement was aimed for optimal defense-ability but the very factors that made it easy to defend also made it easy to contain via siege.  The starvation the first year or two was as much about being unable to venture out for food given the Powhatan conflict as the weather.

I was surprised to see how well the museums addressed the origins of slavery in the U.S., just a bit over a decade after Jamestown was founded.  English privateers were able to capture some Africans and then sell them to the colony, so America's original sin was earlier than I remembered.

I was also surprised to learn that another American stain was partly responsible for the success of the colony: tobacco.  That the colony was not a profitable enterprise for anyone until they figured out how to grow tobacco, and that led to folks getting rich pretty quickly (1620s). 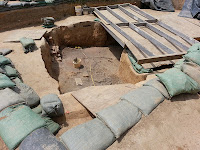 One last surprise--that the archaeology and forensics going on today seem to be relatively new.  I would have expected bodies to have been dug up long before recent times.  But the archaelogical effort is going on now, with the recent discovery of cannibalism: Jane.

Oh, and it was pretty damn cold.  I had the chance to buy some fleece jackets or a rain jacket at a nearby outlet shopping center, but did not.  So, I have been pretty cold the past couple of days.  I don't remember ever being this cold in late May in the middle of the East Coast.

Still, I had a great time at the workshop (with lessons learned to be reported tomorrow), and hanging out with some old friends from grad school.  I guess with Jamestown and Yorktown (after the book workshop here 1.5 years ago), the next place I must visit is .... Gettysburg, right?

Posted by Steve Saideman at 6:08 PM

Email ThisBlogThis!Share to TwitterShare to FacebookShare to Pinterest
Labels: tourism, us history