Very interesting piece in the NYT today about the Marines facing a tough, imaginative foe in the Taliban in Helmand.


Another example of the insurgents’ patience has been their selection of locations for hiding bombs, which the military calls I.E.D.’s, for improvised explosive devices. Many of these bombs are detonated by the weight of a person or vehicle that depresses a pressure plate.
The steppe is vast. The pressure plates are small — often covering not much more surface area than a man’s boot. To emplace the bombs where they are most likely to kill, the Taliban watch the Marines’ habits carefully, including how small units react in the first instants of a firefight 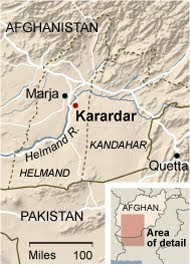 The article goes on to indicate that the US Marines are still not plentiful enough to confront the Taliban--they could take key territories but be able to hold them, so it has to wait until later this year when there are thousands of Marines to add to those already there.

For those who have not been following the Afghanistan mission closely, a couple of facts stand out:
The article is focused on the Taliban and its capabilities, so it ignores the British entirely.  While this might be just due to the focus of this piece, it is still suggestive.  While the British have usually been seen as one of the more aggressive, forward-leaning contingents, I was very much struck last summer by an interview with a British member of parliament.  Ex-military, he would go to Helmand and stay "outside the wire."  That is, outside the base.  And he was very critical of the British effort, and I have heard others say the same.
Still to be fair, despite having the second largest contingent in the country, the Brits probably still didn't have enough troops in the province to do clear AND hold.  Still, it does seem as if the Brits were spinning their wheels for the past several years despite/due facing a high level of casualties.
Posted by Steve Saideman at 8:35 AM