Some Perspective on Afghanistan

Check out the trends at icasualties.org.

Such as this one: 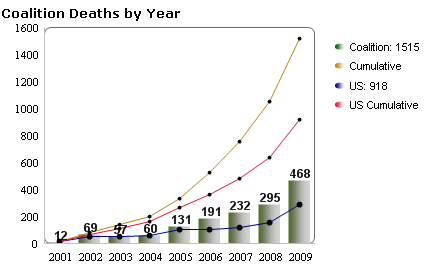 This goes a long way towards explaining Obama's need to take time to make the decision.  It also suggests a change in strategy is due.  However, body counts are not necessarily good guides to anything other than the human and political costs, because one may be facing a tougher situation precisely because the troops are more engaged and there are more of them.

This is from Der Spiegel, and shows that ISAF is significantly larger than it was before.  We should expect to see more casualties as the number of encounters with the enemy increase, as driven by the number of troops on the ground.  One could also read this correlation as increased intolerance of foreigners, but I do not think the public opinion surveys really demonstrate this.  This outcome is almost certainly driven by the logic of numbers in a counter-insurgency campaign--a more serious and active campaign will face more risks.

The question at the end of the day is whether these efforts are leading towards anything.
Posted by Steve Saideman at 10:42 AM