King cost me some sleep last night--not because I was terrified but because I was so engaged in his Under the Dome [UD], his latest novel.  I tried to go sleep much later than usual because I had hoped to reach the end.  And then leaving some 30 pages left out of 1050 (yes, King's book could stop some serious bullets) was probably the cause behind my subsequent sleeplessness.  So, I gave in around 3am, and snuck in the last part of the book.

I don't read much Stephen King, although I have probably seen a good hunk of the movies inspired by his books, includind Carrie, Firestarter, Dead Zone, Stand by Me, Misery, Shawshank Redemption, Green Mile, 1408, and the Stand.  Not the Shining.... yet.  I have only read two of his books, Eyes of the Dragon and the Talisman.  I read the Talisman because I was looking for a long novel to read during my month in Sweden, I think.  I remember Eyes quite well as it was a terrific take on a classic tale--King's mage seizes power and the heir to the throne eventually and righteously restores the Kingdom.  I am not a big fan of horror, despite my love of Zombie stuff, in the written form, but am mildly ok with it in the movies (hence my seen some but not all of King's movies).

I decided to read UD because it had an interesting premise and because it did not seem to be a horror novel (foolish me).  The premise is that a small town in Maine (where else for King?) is suddenly cut off from the rest of the world by a mysterious dome--air and water can pass through but only slightly.  People can talk to through it, wifi works, but not electricity and so forth.  So, this fits into my fiction wheelhouse with Lost, Deadwood, and the like--what happens when a group of people are without government?  Yes, my interest in International Relations leads to an interest in those places characterized by anarchy--an absence of hierarchy.  And as any IR scholar will tell you, the classic term applied is tragedy.

What did I think of it?  See below, spoilers obviously lurk.

Ok, so King ultimately does here what he does in Eye of the Dragon: take a pretty unoriginal premise and has a field day.  The premise of this book, look away if you don't want to be spoiled, is that there is a box placed in the area by alien kids.  Really, far away alien youths have decided to play around with this town exactly like it is an ant farm.  As my wife informed me, this is one of the oldest plot devices in science fiction.  This engine behind everything is not really discovered until deep into this mammoth book.

Actually, to be fair, the primary drivers of action throughout the book are greed and stupidity.  The Second Selectman, Jim Rennie, has used his position to support his various endeavors, including a very large meth facility.  When the dome comes down, it gives him the chance to gain even more power and dominate the town, which provides him with more pleasure than the riches of the meth trade.  His desire for power and to keep it triggers pretty much everything else, just as in International Relations, we consider the dynamics that develop under anarchy if we have at least one predator around that pushes everyone else to overreact in defense of their security.

His principal opponents are an ex-Army short order cook/drifter, the woman who owns the town newspaper, the one remaining health expert, an ex-military policewoman, and a few others.  They are frequently undermined by well-meaning people who decide to confront the big baddie without a plan and without a clue, which just makes things worse, especially for themselves.

Big Rennie does his best to stir the pot by adding a bunch of teenage thugs to the police force, including his own murderous son.  So, really, we do not have the absence of authority, we do not have a true security dilemma, but instead, just like my more recent work, we have competition for control of the existing authority, with the big baddie gaining control and using the arms of the government to oppress any existing or potential challengers to his rule.  Indeed, as it turns out, the agents of government end up doing far more harm than anyone else.

And this goes for the outside world as well. The government tries to intervene indirectly after failing to break the dome, by giving authority to the challengers of Rennie.  This just endangers them and undermines them.  So, outside intervention makes things worse, except for the few times the outsiders follow the instructions of folks inside the dome. 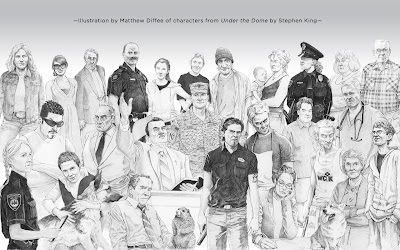 In the book, King introduces us to a ton of characters (see pic), including a handful of very intelligent and honorable dogs (no cats, though), investing the reader in their well-being.  And then he kills them.  Well, most of them.  My wife thought that JK Rowling is a mean lady for killing some really sweet creatures.  In UD, King kills nearly everyone we care about, including most of the dogs.  It reminds me of a classic SNL bit after the movie Independence Day where the President portrayed in that movie is having a debate with Bob Dole during the next election, and says something about the Average American, and Bob Dole (played by Norm MacDonald or Dan Akroyd, I forget) says: "The Average American Is Dead."  Well, in UD, the average townperson is dead, too.  And to be fair, unlike Independence Day or similar disaster movies, there is not unbridled joy at the end.  We are happy for the survivors but realize they are too few.

"Do we need to listen to his speech?  Nah.  We'll be listening to Big Jim tomorrow night  Besides, we all know how this one goes: America's great two specialties are demagogues and rock and roll, and we've all heard plenty of both in our time."


Overall, a very good read, but you will need some time for it as it is fast but long.
Posted by Steve Saideman at 8:39 AM