So, a new study has confirmed once and again that profs tend to be more liberal than the populace: 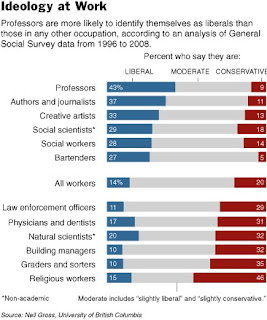 A pair of sociologists think they may have an answer: typecasting. Conjure up the classic image of a humanities or social sciences professor, the fields where the imbalance is greatest: tweed jacket, pipe, nerdy, longwinded, secular — and liberal. Even though that may be an outdated stereotype, it influences younger people’s ideas about what they want to be when they grow up.


The article then goes on to talk about nurses.  Um.  Ok.  That might be true for those gender-typed disciplines (physics).  But really the interesting approach would be to compare the social scientists and natural scientists inside and outside academia, as these folks seem to have made a choice of some sort.   Or had a choice made for them.

Or not: "Intentional discrimination, one of the most frequent and volatile charges made by conservatives, turned out not to play a significant role."

What does separate profs from others?


Nearly half of the political lopsidedness in academia can be traced to four characteristics that liberals in general, and professors in particular, share: advanced degrees; a nonconservative religious theology (which includes liberal Protestants and Jews, and the nonreligious); an expressed tolerance for controversial ideas; and a disparity between education and income.


The advanced degree is, well, a requirement.  So, the question would be--what gets smuggled in with that correlation?  Why do some seek advanced degrees?  My guess, sans data, is that advanced degree probably does not tell us much.  However, it would be interesting to look just at the pool of advanced degrees and then see why some folks go one way (prof-ing) and everyone else goes another.
Non-conservative religious theology and tolerance of controversial ideas go hand in hand--one must be willing, more or less, to follow the research.  And to relish in counter-intuitive findings since those are the ones that get the rewards most of the time.
Income.  Ah!  Perhaps liberals are more likely to be profs because they value other stuff than just income?  It is clear that the income for profs, compared to others with similar levels of education, is lower, so some twisted gene must be responsible for academics seeking a career that pays less.  Perhaps liberals are actually more risk averse than conservatives so that they choose lifetime employment over higher average income but more career uncertainty.

To really get at this, one might want to figure out what determines both political ideology and job choice.  What is someone a liberal or conservative?  My Americanist colleagues have read far more of this than I so they could provide a clue (help, lil' Steve?).  But that would seem to be the right way to proceed as there are many characteristics associated with ideology and not all of them might be relevant for career choice.

There is probably something to this identity stuff:


To Mr. Gross, accusations by conservatives of bias and student brainwashing are self-defeating. “The irony is that the more conservatives complain about academia’s liberalism,” he said, “the more likely it’s going to remain a bastion of liberalism.”


It may be the case that the academy is actually not so much liberal but more not conservative as conservatives have been avoiding it.
Posted by Steve Saideman at 9:43 AM

Conservatism is about eschewing anything you don't want to hear in order to protect your own preserve. Those who become professors, especially in the humanities and social sciences, are regularly exposed to opposing views and facts. Part of their job is to argue these things, not simply on the grounds that their views or ideas are morally superior or that they are being thwarted by a grand conspiracy, but on the basis of factual data and taking in a variety of interpretations into their arguments.

Essentially, liberalism is the belief in the liberalization of thought, and since this is the whole point of scholarship and the search for knowledge, professors skew toward the liberal.

In many respects, political science is a conservative discipline. We are suspicious of new ideas until we have replicable proof based on a logically coherent research design. And even then we don't reject our old ideas until there's a better theory to take its place. At least, this is science-based political science, which I think too often is not shared with undergrads in favor of the more "squishy" policy areas. That's where political bias can really come into play. For instance, if you assign Andrew Bacejovich and Larry Diamond as your examples of "conservative viewpoints" alongside a large number of other liberal readings, then I suspect there might be a bit of bias creeping into your course. And students who are confronted with this kind of open bias in undergrad are probably much less likely to pursue academia as a profession.

On a larger sociological note, most of the conservative people I know who majored in polisci are either going into law or government policy-related jobs. They'd like to make an immediate impact in whatever they're doing and don't see the need to spend 5+ years getting a PhD to make that impact. Some too are motivated by the financial aspect, correctly noting that they can make a larger difference with a larger checkbook.

I wonder how much their choice of profession is caused by their college experience with more liberal professors, but it could be a factor especially thanks to some well-known examples of political correctness run amok and concerns over getting accepted in the discipline (i.e. tenure) by more liberal colleagues. It's definitely a gamble to go against the grain when you're talking about a discipline where your peers decide your future, so I can understand how some people would be dissuaded. I think conservative fears as a whole are largely overblown, but I haven't yet been tarred and feathered (too badly!) so perhaps I'll change my views in the future.

Where's the link to the study?! Or am I just missing it?