Today was the final exam for my intro to IR class.  McGill has strange final exam procedures that makes the experience akin to the OWL exams at Hogwarts: 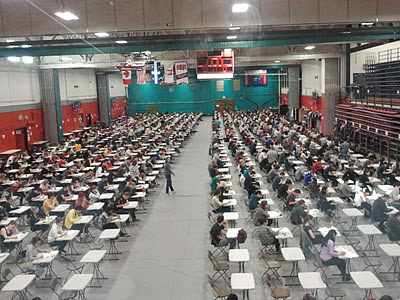 Yep, 600 students in columns of 16 by about 40 rows.  A few students had ear plugs.  Others had water and other preparation.  McGill has invigilators (never heard the term before coming here) to monitor the exam, make sure the name on the exam matches the student's id card, to answer questions and so forth.

I was there for the first 20 minutes or so, mostly calming students who were over-thinking.  The exam asked students to consider at least two of the major issues covered in the last five weeks of the class, so some pondered whether two was enough.  The question, inspired by a twitter/blog conversation a couple of summers ago, was about Zombies--would the international community cooperate or not in the face of a Zombie outbreak?  The question really is about cooperation, not Zombies, but it allows for a smile or two before they grind their pencils and pens away for a couple of hours.

This time, they are better armed perhaps because I supplemented the regular text with Drezner's Theor of International Politics and Zombies.  I will be interested to see how they responded on the exams, with this extra material with which to play.

Anyhow, I have one last class at McGill--Civil-Military Relations in the winter.  I just hope there are relevant things going on in the world to make that class interesting.  Or else someone will compel me to show heaps of the new Battlestar Galatica.
Posted by Steve Saideman at 11:27 AM

We're in for six more months of "last ever at McGill" posts from you, aren't we? For someone who's in a rush to leave, I think you're revealing a hidden sentimental nostalgist side...

Oh, you don't me at all. My sentimental nostalgic side is far from hidden.


And yes, I want to leave some elements of town quickly (traffic, language laws) but other parts not so much (students, snarky Associate Professors).

I took your class my first year, only in my second year now, but needless to say, best class yet. Learned so much, fully entertained, and Theo, the T.A. was also amazing. Funny enough, while embarking upon my post-secondary career was considering between McGill and Carleton Journalism....darn you Saiderman.

PS. maybe you don't remember but I was the odd girl who asked you what your "star sign was." I could swear you were a cancer, but you corrected me, in a bewildered manner, "no I'm obviously a Leo." Obviously.

I asked about cooperation in dealing with a true pandemic in globalization and security. Not too many people here thought we'd see a true cooperative effort.

Seems like World War Z has the best international treatment of zombie cooperation/conflict.