Parting is Such Sweet Sorrow

Deja vu!  The stories coming out of Iraq seem to be from the same script that in heaps of Canadian newspapers last summer as the Canadians pulled out of Kandahar.  The symmetry gets even more apparent with this story: the Americans are wondering what to do with their last detainee.  The Canadians still have this problem five months after closing up shop in Kandahar.

This one is more complicated since the Republicans are already making noise about it and because the detainee is tied to Hezbollah and Iran.  So, not lots of good choices abound.  I don't think the Obama Administration should take too seriously Republican criticism on this since any talk about Iraq reminds folks who started this unpopular war in the first place.  The focus should be on doing what is best for the US in the region in the long term, and stepping all over Iraq's sovereignty at this point may not be the way to go, even if it means releasing one terrorist. 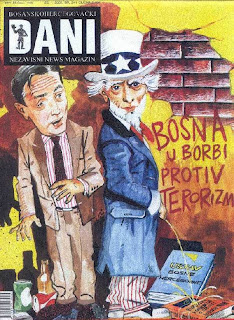 Otherwise, one can become the subject of magazine covers like this.  Yes, when the US sent six Algerians from Bosnia to Guantanamo in early 2002, it did not play well in Bosnia.  Uncle Sam and the Bosnian President are seen as drunks, with US pissing on the EU constitution.  At the time, this transfer seemed like a good idea, but that is before Gitmo became known for, well, what it became known for.
Posted by Steve Saideman at 8:43 AM