Berlin, Day 3: A good day to be a political scientist

Well, it is always a good day to be a political scientist, but with interesting elections of late in Lebanon and Iran, there are heaps of good questions out there. Too bad we cannot provide definitive expectations. We can focus on the key dynamics and make some educated guesses. But as long as personalities and other ad hoc factors matter, we can only be humble. To build on Rumsfeld, the key are the known unknowns--we don't know if the military will shoot and, if so, upon whom? We know that the Iranian clerics have organized to repress and that the police are doing so. But, it could turn. The coup-proofing that the Iranian regime has developed (allowing the Revolutionary Guards to develop alternative sources of income, the existence of multiple sources of repression, etc.) seem to be robust enough.

But I was really referring to an interesting day of interviews, a very good start to my week in Berlin. I started with an interview with a consultant who used to work in Afghanistan in various roles (NGO, UN, German government). Then, I had lunch with a member of the German Ministry of Interior and talked police stuff--another place where caveats can shape effectiveness. Then I had conversations with German and Dutch officers working in the Ministry of Defense. Finished with an interview of a member of the Bundestag. I am probably 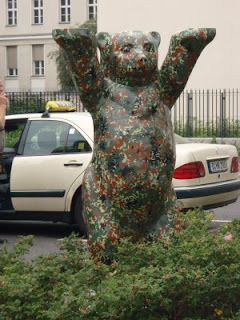 more confused than before, but that is a natural part of the process. Confusion exercises my brain muscles, which is why I try to be confused at all times.

Some interesting (at least to me) observations along the way:
Tomorrow, more interviews: Foreign Ministry, Canadian DATT, think tank type.
Posted by Steve Saideman at 4:03 PM