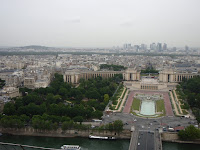 Today, I started to do real work. Well, the interview was at 4pm, so I still had more time for more tourism. I did not go to the top of the Tour D'Eiffel as the long was way too long. Instead, I took the stairs--good exercise and was lucky to go up without getting stuck in the stairs behind a group of students.

It seemed like the most common language, after French, might just have been German. Probably English, but it would have been ironic after the D-Day ceremonies to have more Germans than other folks on the sym 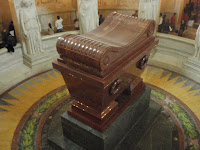 I then went over, in the rain, to the Hotel Des Invalides--now a history museum and tomb of El Shorty. I posted earlier about the history experience. I then went to my first interview with a scholar working on French civil-military relations, among other topics. Turns out he is wondering how European parliaments do oversight, while I am wondering (overlapping with the project that has brought me to Europe) about British-style parliaments and oversight of militaries. I hope to go to Australia and New Zealand next year to pursue that set of questions, as they are most comparable to Canada (thanks for the suggestion, Paul Martin).
Posted by Steve Saideman at 12:30 PM

Email ThisBlogThis!Share to TwitterShare to FacebookShare to Pinterest
Labels: Paris