Ok, seems like my mood has gotten less whiny and a bit more spunky now that I have touched down in Berlin. The weather was great (although a bit windy for ultimate though good for cooling hot tourists).

Again, a bunch of observations and perhaps a question or two for the three readers out there: 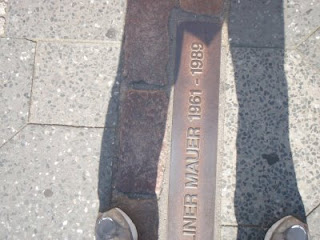 Posted by Steve Saideman at 3:21 PM

Maoz Azaryahu has a piece in political geography 16(6) re: renaming street names in east berlin. He makes a point regarding marx, the street bearing his name that was left is actually just a continuation of one with hegel's name. It seems that the intention was to honour marx the thinker whilst removing his name from other parts of the city that were considered politicized space.

As a librarian, I can't help but offer a quick citation.