My trip has been chock full of good and bad timing. It was good timing to go to the Musee d’Armee a couple of days after the 65th Anniversary of D-Day. The most striking part of the French presentation of les Mondiales du Guerre was its span of time: 1871-1945. I am used to thinking of 1918-1945 as a single war with a somewhat peaceful interregnum. But to include the loss of Alsace and Lorraine in the Franco-Prussian War/German war of unification in 1871 is quite interesting. Some of the displays are somewhat contradictory. Some of the text suggests that the German invasion in 1914 and the Schlieffen plan were failures, but others demonstrate how close the Germans came to Paris.

There was an interesting wing of the museum dedicated to the resistance fighters, and the price paid by these folks and the cities in which they resided became abundantly clear. I tend to be a Charles De Gaulle skeptic, but he was the focal point of the effort during the war. His being difficult with Eisenhower and the others was probably necessary. [His being difficult to the Anglophones of Quebec not so much].

It was noted in one of the displays that the future of Europe was drawn up by FDR, Stalin, and Churchill at Yalta sans France. The favorable coverage of the Soviet Union in the displays was a bit surprising, not because of the Soviet role in the war (see below) but just that these displays were a bit more favorable than ones I have seen elsewhere.


D-Day Clarification—A Bit Late But Still Relevant
This past weekend was the 65th Anniversary of D-Day and a particularly meaningful one, given the age of the surviving veterans. My picky point has to do with the way the invasion has been portrayed—yes, it made history, but not by saving Europe from fascism. Stalingrad and the overwhelming wave of Soviet forces doomed Nazi Germany. Without a successful invasion, it is most probable that the Soviet Union would have defeated Germany on its own. D-Day made a big difference, not via the defeat of Germany, but by dividing Europe for fifty-four years and perhaps even fostering the end of Communism in 1989.
France would have been liberated—but from the south via the invasion from the Mediterranean. This effort was important, less for liberating France, and more for providing an additional route for fuel, ammunition and other supplies. If the invasion of Normandy had failed, this might have become the main effort. But, this would have delayed the arrival of Allied forces upon the German frontier, leading to a division at or near the Franco-German border.

This would have meant a united Germany under Soviet rule, and Austria would have been in similar shape.

The question then is would this have prolonged the Cold War, given the absence of a robust West Germany in the Western camp? Or a shorter cold war, given the costs of occupying the rest of Germany?

This is all hypothetical. The main point is that the emphasis on D-Day ignores the reality that the Soviet Union kept far more Germans busy in the Eastern front, killed far more of them, and bore a great deal more casualties. Indeed, while some in the West wanted a rush to Berlin, Eisenhower and others were content to let the Soviets pay the price and gain the prize.

While checkout in Napoleon's tomb, I realized that the old men near me were D-Day vets. A quick glimpse of the passes they were still wearing indicated that I had guessed right. With Obama back in DC, this was my proximity to greatness du jour.

Near Napoleon's tomb was a monument/statue for Gen. Ferdinand Foch, leader of the 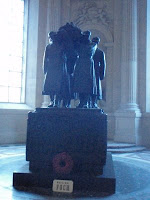 French army during much of World War I. Given how poorly the allies performed for most of the war, I am not sure any of them deserved monuments. Likewise, there was a display that referred to the Mutinies among the French soldiers in 1917, and the references in the displays were pretty fair to the mutineers, except downplaying it with something like "only 40 plus were executed." Oh my.

Update I: Read some about Foch, and can see why the French lionize him. Preventing defeat is a huge task, something that his WWII successors failed to do, despite this picture. So, mea culpa.

Update II: Finally got a chance to upload the pics from today, and it reminded me of a display about the performance of the French Army in May/June 1940. It suggested that the French army dealt the Germans some significant blows, but given that the French army with the British outnumbered the Germans and had equal numbers of tanks, I am not sure this is very impressive. I am sure that individual units fought hard and honorably, but the larger tale of military performance (and civilian leadership) in 1940 was of a tragic collapse. 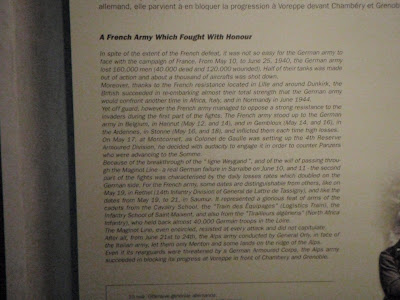