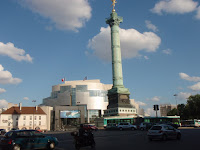 This is my second to last day in Paris, and after 22 years and two trips, finally one rain-less day. Too bad it was a working day. I did get some tourism out of my system in the late afternoon/early evening, though. So, some more observations about life in Paris, 2009:


Update: One more thing--a whole bunch of student groups were entering around 6pm. A) Does the Guggenheim or other modern art museums get as much student traffic? B) After school?
Posted by Steve Saideman at 3:25 PM

I liked it, you can find more modern art from spacify.

I have not mastered the techniques for deleting inappropriate posts, but the one above is a link to a store, not to an art gallery. And this Jessica is not the one we would expect.