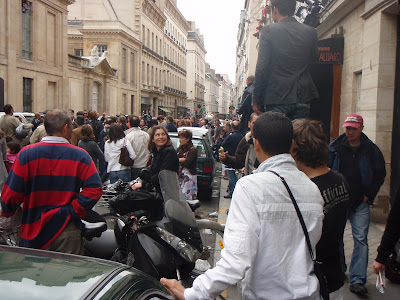 I was lucky enough to get almost until 4pm (local time) sans rain. But my streak of days within rain in Paris remains perfect. Took more pictures just to prove that the sun was out today. And the began with a near-Obama encounter and then was interrupted later in the day with yet another Obama-created crowd scene.

More Impressions and Stories from Paris:

Are you kidding me?? There's more French on signs here than in Paris?!! I shouldn't be that surprised but its another reason to be fed up with Quebec. (I'm sorry i'm ranting on your blog):)

To be clear, there is not less French in Paris than in Montreal, but that there is more English (small type, of course) and also German and Italian (if I remember correctly) inside the metro so that we non-French do not wound ourselves and can get out in an emergency.